Some rather good leeks, yes we’ve a few preserves in the cupboard and the amazing ability of French beans to hide in plain sight! 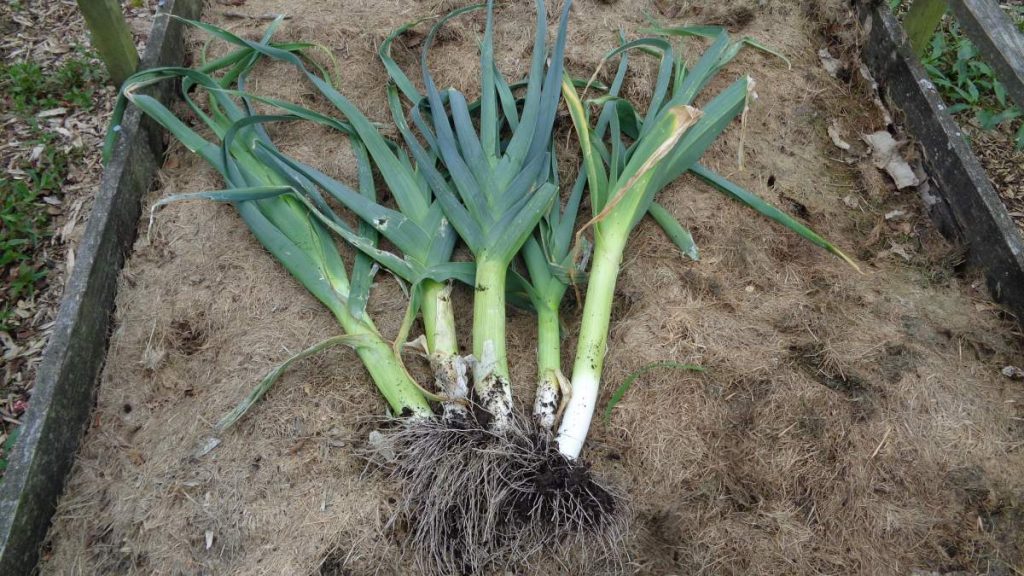 Last of the bought-in seedling leeks. Biggest about 3 feet from top to toe!

The last week has been pretty manic and somewhat stressful. Mainly it’s been about finishing off the Dig for Victory book. Final proof-reading of the text, positioning of graphics and then thinking I was finished only to realise the index needed sorting out. The changes had moved pages around so that needed re-doing. Then the excitement of discussing paper thickness and type with the printers, who are exceptionally committed to quality.

The weather isn’t exactly what I hoped either which, coupled with some personal stuff, has put a damper on my fire. Still, life goes on and we count our blessings. The last six months may have been a strain for us but too many others have had a much worse time for me to expect sympathy.

You may recall I bought some leek transplants. They were a panic buy shortly after the lockdown started and at 50p a plant, a bit pricey. Still, the leeks are quite something! Not top show-grower standard but they’d be in the running at a local show. Not that I’d enter them, if there was a show. Not exactly cricket, claiming credit for a result which is down to bought in seedlings.

I brought in a couple for leek and potato pie, the head chef told me one was plenty. The leeks started in Bustaseed modules in the polytunnel are looking like they’ll give these a run for the money. Given a little time of course.

I think the bought-in leeks were most likely grown in a climate controlled greenhouse with additional lighting in the same way I start my tomatoes and peppers. It really goes to show what can be achieved if you put the resources in.

The last few have been heeled in for now. We need to use them – or give them away – pretty soon as the ones in the polytunnel are getting big. Amazingly easy croppers, leeks and generally problem free. More information on growing leeks

I popped up to the polytunnel to water and noticed a few beans were ready. Started picking and then nipped back to the house for a colander to put them in. Half an hour later, took a full colander back to the house and returned to the tunnel.

I noticed a few beans that were ready.. back to the house for another colander. It’s amazing with climbing beans how you can go over the plants so carefully, pick every single pod and a couple of minutes later there’s a load you must have missed. Mind you, I’ve been known to look for my specs whilst wearing them! 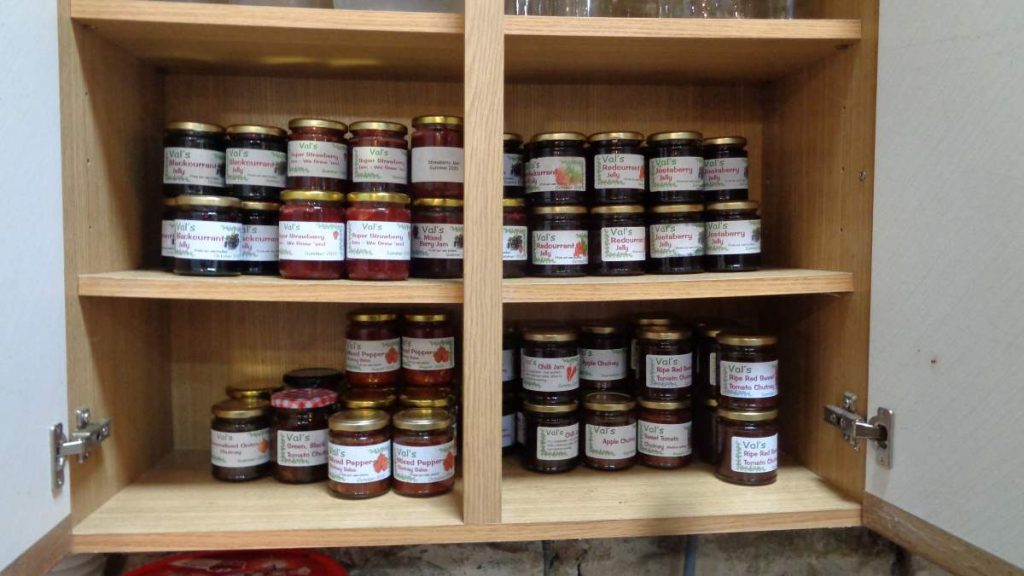 Our preserves cupboard in the cool shed.

Whilst I’ve been glued to the computer, Val’s been turning gluts into preserves. Her caramelised onion chutney is exceptional. Mixed berry jam, sweet tomato chutney, mixed pepper chutney, the list goes on.

I think we might need another store cupboard soon if this carries on! In fact, I’m pretty sure the 40 year old ex-kitchen cupboard is reaching the end judging by the shelf bowing.