Coming Soon – The Wartime Monthly Growing Guides in One Volume 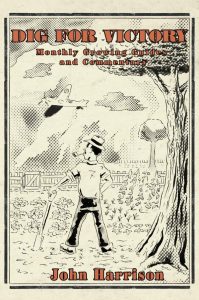 Most British people have heard of Dig for Victory and recognise the iconic logo of a boot pushing a spade into the soil. The campaign may not have been as dramatic as the military campaigns such as the Dunkirk retreat or the Battle of Britain but it was just as vital to the eventual victory.

Unlike those military campaigns that lasted weeks or months at most, the Dig for Victory campaign ran from start to finish of the war and for some time after. It wasn’t until 1954 that food rationing finally ended.

The government made land available, creating allotments and plots to enable the public grow their own food supplementing the ration with vitamin-rich fresh foods. As not everyone knew how to do it, they ran an educational campaign to help them.

This educational campaign has had a massive influence on how we grow vegetables for the last 80 years. The government guides from those dark days of the war are often as valid today as they were then.

The Campaign that taught us to grow our own

They’re simple and straightforward but most importantly, they work. By following them, even a complete novice can put fresh wholesome food on the family’s table all year round.

I have collected that original monthly growing advice issued by the government from the war and put it into one volume with a commentary explaining where and why best practice has changed for the modern gardener.

The last details of the book are now finalised and the expected launch date is mid-October, 75 years after the end of WW2.  The price will be £12.99. Unlike my other books this is a larger format volume with colour which does add to the cost.

Check back soon for our introductory offer