By April spring should be well and truly underway, the soil warming up nicely and everything growing away. Don’t be complacent though, it’s been known for a cold snap with snow to strike even in the sunny south of England. Keep an eye on the weather forecasts and a hand on the horticultural fleece and insulation materials.

Sowing & Planting in April on the Vegetable Plot 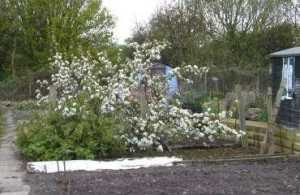 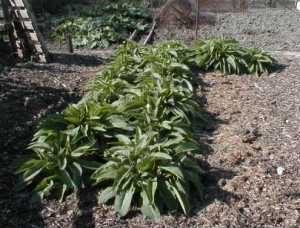 Comfrey near ready for a cut – the most useful herb you can grow. See Bocking 14 Comfrey

If March has been difficult and you’ve not managed to get much done, you’re going to have a busy April. With onions you’re really pushing it so if they’re not planted make it one of the first jobs of the month

The weeds won’t be slow and it’s time to sharpen your hoe. A sharp hoe is the best friend a gardener can have. Just slide it back and forth slightly below the surface of the soil and you’ll stop the weed seedlings in their tracks.

There’s an old saying “Hoe when you can’t see a weed and you’ll never see a weed” which is very true. Hoeing keeps the top soil broken up so in times of drought water cannot get to the surface by capillary action and evaporate. When it does rain a hoed surface will prevent the precious water running off and ensure it goes down to where it’s wanted.

Things to Sow in April

Covering your carrots with a fleece and ensuring the edges are buried will stop the carrot root fly from gaining entry to lay eggs by your carrots. The eggs hatch into larvae that burrow into the carrot root, killing the plant or at least ruining the crop.

Easter, a variable feast that usually falls in early April is the traditional potato planting time. If you have a comfrey bed and it has sprung back, the first cut laid in the trench under the potatoes will provide nutrition to get them off to a good start.

On the subject of comfrey, if you make a comfrey tea it will help you to a great crop when you use it on your potatoes. Many novice growers wonder why they have small crops of potatoes and most often this is just down to lack of food for this hungry crop. See feeding potatoes

A good tip in a windowsill is to stick some silver cooking foil onto cardboard and place on the inside to reflect light back onto the seedlings. This will help prevent the seedlings being drawn. 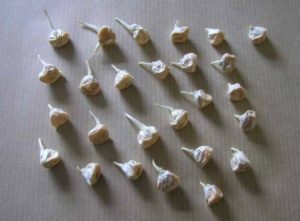 I like to pre-chit my sweetcorn, I lay the seeds on a layer of damp kitchen paper and then place a layer of paper over in an airtight box. An old ice-cream carton or a Tupperware type box is ideal. Check carefully each day and as soon as the small white sprout appears, plant the seed about half to an inch deep in a 3″ pot of general purpose compost in the greenhouse.

When the shoots appear about an inch high, plant out under cloche being careful not to disturb the root (sweetcorn hates root disturbance) under a cloche. Sweetcorn needs a lot of nitrogen and a teaspoon of dried blood per plant or water with urea (this is a chemical, I do not mean pee on them!)

Many of the crops you can sow directly will also benefit from cloching, especially as you move northwards or started off in modules in a cool greenhouse or coldframe and then planted out later.

Strawberries can be planted out now, it’s best to remove flowers in the first year as you conserve strength for growth and gain larger crops in subsequent years. An easy way to gain strawberry plants is to plant the runners into pots and when rooted cut the runner. The plants don’t last forever so you need to rotate them every three to five years.

Hand pollinate peaches and nectarines. Tickle the flowers with a small paint brush to spread the pollen. Cover if a cold spell threatens.

A good layer of compost around the base of fruit trees will ensure they have the nutrition to provide another good crop for you.

I’ve mentioned the carrot root fly but the gardener’s worst enemy is awakening. The evil slugs and snails are coming out to eat entire rows of succulent young seedlings overnight so take action now.

We’re in the ‘Hungry Gap’ between the last of the winter crops and start of the early crops but there are still a few things available, late sprouting and chards for example plus you may have some early salad crops like radishes and fast lettuces from the greenhouse border.

Spring cabbage, broccoli, very early peas, greenhouse potatoes are all possible for experienced growers. Outdoors salads that may be around: claytonia and corn salad.

Do re-check your stored crops. On a fine day, empty out the potato sacks and check for any rotten potatoes. If you’ve strung onions, watch out for the odd rotten one and remove it before it spreads.