January is generally a very cold month with hard frosts freezing the ground although there are no guarantees with British weather. Looking through my diaries, snow isn’t that likely for a prolonged period but you never know.

Sowing & Planting in January on the Vegetable Plot 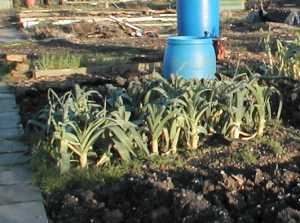 Leeks standing on the allotment in January,
Leeks left standing will be fine whatever the weather but you may find them hard to get out of frozen ground or taking up ground you want to dig or manure.

There’s nothing to sow or plant outside with the possible exception of garlic and even shallots if the weather is mild but there are a few things you can start off under glass or even on a south facing window sill. Tomatoes and aubergines can be sown. They will do best in a heated propagator to get them going.

The big problem at this time of year is available light. Covering cardboard with aluminium foil and standing it to the north side of the seed tray will reflect extra light and help prevent leggy, drawn seedlings without the expense of special horticultural lights.

Another option is to use grow-lights. I’ve never been keen on these as they used to use a lot of energy just to gain a little time but the new LED lights are so much more efficient I’m beginning to change my view.

Onions from seed can be sown in January but unlike tomatoes who like it hot, you want the temperature around or slightly below 15C for onions. Watch out on sunny days, it may be cold outside but the temperature can shoot up in the greenhouse or coldframe. 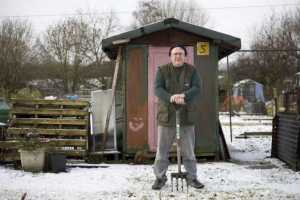 You never know when it’s going to snow!

Get your order in for seed potatoes and start chitting them. If you leave it too long you may not be able to get the varieties you want.

Growing Potatoes in the Greenhouse

If you’ve a greenhouse and it’s fairly warm, you could try growing 2 or 3 seed tubers in a bag of compost in the greenhouse. See growing potatoes in bags in the greenhouse A lot depends on your location, I’d leave it until mid-February at least here and early March in the colder areas of the north.

In an ideal world, you’ll have the plot dug over, limed or manured if required and the leafmould slowly forming in a cage. In the real world, any decent days are used in a last ditch effort to catch up!

On lighter soils and in dryer areas of the country, I’d strongly recommend a bean trench. See Growing Runner Beans.

As I stated for December, it’s the traditional time to get your seed orders in. Don’t forget we’ve combined seeds from a number of suppliers on this website so you can pick out different varieties and compare prices. See Vegetable Seeds

Resist the temptation to try out the new secateurs Santa brought you on stone fruits like cherry and damson, which should be summer pruned although you can still prune apples and pears etc as they’re dormant.

Bare rooted trees and bushes can still be planted until March

Ventilate on warmer days to prevent moulds getting established. Ensure vents and doors are closed firmly if the weather gets rough

Keep an eye out for loose clips and panes and repair as soon as you possibly can.

Leeks left standing will be fine whatever the weather but you may find them hard to get out of frozen ground or taking up ground you want to dig or manure. In that case draw a shallow trench, dig up your leeks in good weather and trim the roots. Lay them in the trench at an angle so most of the leek is out of the trench and cover with loose soil. When you want some, just pull without any strain,

Parsnips and swedes in the ground can come up when you are ready, cover with fleece or straw to stop them freezing solid into the ground. You may even have some scorzonera roots along with winter radish.

Kale and winter cabbage at least should be available and Brussels Sprouts which may well go through to March. Celeriac may have stayed in the ground and even celery may have been kept under a thick mulch.