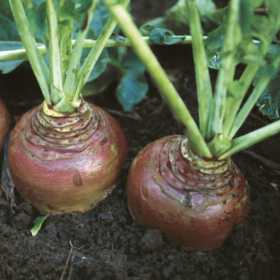 Swede looks similar to turnip and is still known as ‘Swedish Turnip’ in America. It is a member of the brassica family so club root will be a problem if you have this on your plot. Swedes take 20-26 weeks to reach maturity.

Swedes do not grow well on acid soils, so it is a good idea to check your soil and add lime if necessary. They grow best on a neutral soil (pH 7 ) which has a good humus content.

Swedes do not need a lot of feeding, 50 grams per square metre of general purpose fertiliser like fish, blood & bone or Growmore applied a couple of weeks before sowing, is usually sufficient.

Sow thinly 1cm deep in rows 50cm apart in May and June, thinning out in stages until the plants are 20/25cm apart. In raised beds they can be spaced at 30cm each way. They can be started in modules, thinned to one per module and grown on. The whole module is eventually planted out to avoid root disturbance. Keep them weed free and water in dry periods to avoid woody texture and split skins

Apart from clubroot , swedes can be troubled by the cabbage root fly . If this is a problem on your site, use horticultural fleece, or enviromesh, to keep the pest off until the crop is well established. They can get flea beetle early on, but seem to grow through the attack without much trouble. Mildew can be a problem but some new varieties have been bred for resistance.

Harvesting can begin in Autumn as soon as the plants are a decent size. They are frost hardy so are best left in the ground over winter until required. They are their best within a week of picking, but can also be stored in moist sand in the same way as other root veg. They also freeze well, after cutting into cubes and blanching for 2 minutes.

Swede is good mashed, cut into cubes and boil for 20 minutes, or until tender, drain well and mash with butter, cream and pepper. You can also add a little powdered ginger or nutmeg to add some zing. These can be a little sloppy so try mixing 50/50 with mashed potatoes. Swede is also used in soups and stews.

Swede Brora has deep purple skins and bitter-free flesh. It has outstanding winter hardiness and the foliage has good resistance to powdery mildew. Brora has won the RHS Award of Garden Merit .

Swede Ruby has dark purple-skinned globe shaped roots with creamy yellow flesh and is bred for extra sweetness. It has excellent winter hardiness and shows good resistance to Powdery Mildew, and has won an Award of Garden Merit.