Whilst the bad news is that once you have clubroot in your soil you are stuck with it and very unlikely to ever be clubroot free, the good news is that you can continue to grow brassicas successfully on your land with some care. In fact prize-winning cauliflowers and cabbages have been grown on clubroot infected plots using the methods below.

You Can Grow Brassicas on Clubroot Infected Land 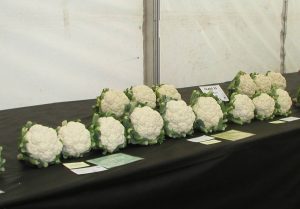 Club Root – Plasmodiophora Brassica in the soil does not mean that you can’t grow top quality cauliflowers, cabbages and other brassicas.

Reduce Clubroot in the Soil

You can not eliminate the disease but you can reduce the number of infectious cysts.

Since there are some 300 species of plants including many common weeds that are members of the crucifer family and affected by clubroot, keeping the plot weed free will help avoid a reservoir of disease building up.

When brassicas are harvested, remove the roots from the ground. Promptly remove any radishes that have gone over and the same with turnips that are too long in the ground and gone woody.

Don’t compost the roots or the radish & turnips. Whilst hot composting should destroy the clubroot, cold certainly won’t. Either dispose of in your household waste or burn in an incinerator.

Don’t use green manure mustard on the plot. Mustard is a member of the brassica family and will act as a reservoir for the club root.

Whilst any sensible crop rotation will not eliminate clubroot, if you can get a 6 year rotation it will help reduce the cyst load in the soil. A three year rotation is probably the worst thing for clubroot as the cyst load may well be at peak in years 2 and 3 after growing brassicas.

Make the Soil Unattractive to Clubroot

Clubroot, being a sort of slime mould / fungus thrives best in acid wet soils. Before planting brassicas, make sure your bed is well dug over and with heavy clays add grit or sharp sand to improve drainage. Good soils with plenty of organic matter are less attractive to disease.

Increase the pH (reduce acidity) of the soil. You can take the pH up as high as 7.5 or even 8 by adding lime, preferably in the winter prior to planting out. Neutral or slightly alkaline soils deter clubroot and brassicas like a high pH anyway.

I have heard good reports from people sterilising the soil by drenching the planting area with armillatox at 100:1 dilution, 20 litres per square metre 3 weeks before planting. Jeyes fluid may also be effective. However this is not an approved use of the products in Europe.

There is another problem with soil sterilising in that it destroys the micro-ecology of the soil. All those invisible to the eye organisms that work together to help plants take up nutrients and maintain a balance.

The use of Perlka™ as a fertiliser is said to help reduce the cyst load and improve plant performance despite clubroot in the ground. Perlka contains calcium, carbon and nitrogen fused at temperatures greater than 1,000 deg C into a fertiliser, calcium cyanamide.

In the soil Perlka slowly and steadily releases its calcium and nitrogen. Calcium from Perlka raises the soil pH in a similar manner to lime (calcium carbonate) whilst the nitrogen stimulates brassica growth and vigour helping the plant resist the disease.

Additionally, Perlka™ is said to have intrinsic fertilising properties capable of encouraging soil microbes that are antagonistic to Plasmodiophora brassicae diminishing its abilities to colonise and thrive in brassica roots and simultaneously stimulating disease resistance in the brassica plant. Maximum effect is obtained by applying 7 to 10 days before sowing or transplanting.

Starting off Leafy Brassicas in Pots

This method has been proven to work and enable good quality crops to be taken – even prize winning cauliflowers.

Sow into a seed tray of multi-purpose compost which has had a little lime added. I put a dusting, like icing sugar on a cake, on an inch thick layer or compost and mix well.

When the seedlings have emerged and can be handled, transplant into 3″ pots of either the same compost & lime mix or a mix of that compost and John Innes #3 at 50:50

Plant the seedlings deeply so the leaves are still above the soil level but most of the stem is buried. This encourages root growth.

Once the roots start to crowd the pot you can move on to a 5″ pot of the same compost mix or for lightly infected plots, into the ground. For very infected plots, take them on to 8″ pots. When planting out, dig a hole roughly 30cm deep and in diameter. Sprinkle heavily with garden lime.

Fill the hole with the growing compost keeping a pot in the middle the same size as the brassicas are growing in. Firm down well and then remove the pot and your plant will fit perfectly into the hole. Firm again and water well.

Fill a 12 to the seed tray module with a similar compost mix as for the leafy brassicas. Sow two or three seeds per module and thin to one on germination.

Once the roots have started to crowd the module it is time to plant out. Before planting out add extra lime (unless the pH is neutral already) to the soil and your should be OK for a crop.