A Fertiliser Program for Cabbages

Cabbages, Cauliflowers and other leafy brassicas are notoriously greedy. When you look at the leaf volume they cram into a relatively small space it’s easy to see why they have such a high nutrient requirement. It’s only by ensuring those nutrients are available and other conditions right that the plants will fulfil their potential and provide the best possible crop. 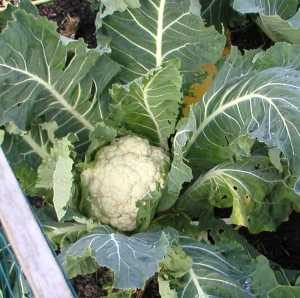 Using the same program for cauliflowers and other leafy brassicas as for cabbage gives good results.

Ideally you will need a soil testing kit to find out how rich or poor your soil is. A decent kit will cost around £20.00 to £30.00 and enable you to test pH – acidity, N – Nitrogen, P – Phosphorus, K – Potash (Potassium) many times.

Without soil analysis then you will have to rely on your judgement as to the fertility of the soil. Even a good guess isn’t as good as knowing though. – Soil Testing Kits

Although this article is targeted at cabbages, requirements are similar for most of the leafy brassicas like cauliflowers, romanesco, calabrese, sprouts etc. Don’t forget that requirements will also vary according to the variety grown. A small cabbage like Minicole will need less than a quarter of the nutrients of a giant variety like Brigadier.

We’ll start with an assumption that the existing soil is in good heart, fairly fertile and has a high pH (low acidity). Over the growing season your cabbages are likely to need an additional 23g/M2 of Nitrogen and 5g/M2 of Phosphorus and Potash respectively.

If you add a wheelbarrow load of 20Kg of rotted cow manure per square metre to the soil in the autumn this will supply an additional 140g of nitrogen assuming the manure is approximately 0.7% nitrogen.

By the spring the winter rains will have washed out 90% of the nitrogen so the actual additional nitrogen available will be more like 14g which still leaves a deficit of 9g/M2 on our requirement.

The manure has probably added enough of the more stable phosphorus and potash so the chances are it’s only nitrogen we need to worry about. However, if you haven’t managed to obtain any manure then you’ll need to apply a general purpose fertiliser like fish, blood and bone or Growmore in the spring. Fish, blood & bone is usually 5:5:5 which means 5% of each major nutrient, Growmore 7:7:7 which is 7%

Applying 100g / M2 of fish, blood & bone or 70g / M2 of Growmore will supply the required potash and potassium but still leave us some 9g / M2 below the level the manure would have achieved, giving a total deficit of some 18g / M2

Organically you can cover this 18 grams per square metre using dried blood (which is 12% nitrogen) or pelleted chicken manure which is 4.5% nitrogen. Artificial fertilisers like sulphate of ammonia run at 20% nitrogen but for brassicas I use nitro chalk at 27% as it also contains some lime, holding up the pH which is great for brassicas.

Now if you apply all the required nitrogen in one go at the beginning of the season, the rains will wash out a substantial amount over the season. So the efficient way is to add the additional nitrogen fertiliser in smaller amounts at intervals.

Lets assume your variety will take some 20 weeks to mature from planting out. You could add roughly a gram of nitrogen per M2 a week but realistically it’s probably best to add a third at planting time, a third six weeks later and the final third 12 weeks after planting.

How to calculate the additional amount of nitrogen (or other major nutrient) required from fertiliser.

The formula for the calculation is: Amount of required nitrogen divided by nitrogen percentage in the fertiliser times 100.

Do remember that over-use of fertilisers will not produce better results than supplying the optimum amount. Over use merely costs more money, uses up valuable resources for no benefit and can damage the environment. Excess amounts of nitrogen can result in soft sappy growth which encourages aphids and other pests.