The cabbage root fly is arguably the worst pest affecting brassicas in areas where they are common. As well as cabbages it also attacks cauliflowers, romanesco etc but although it can, rarely goes for other brassicas like broccoli, calabrese and kale. It is also known as turnip fly so swedes and turnips are obviously at risk 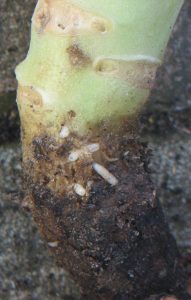 Plants affected by an attack will tend to wilt and droop, especially in hot weather. Plants may show a blueish tinge or yellowing of the leaves as if suffering from nutrient deficiency, which they are in effect as the damaged roots are unable to supply enough nutrients to the growing plant.

Young plants die but plants attacked older may well struggle on, looking sickly. The cabbages fail to heart, cauliflowers forming tiny heads that blow quickly. The symptoms are very similar to that of clubroot infection and the only way to make a definitive diagnosis is to dig up the plant and inspect the roots.

Cabbage root fly will leave little tunnels in the roots and you may way find small white maggots eating away at the roots that will later blacken and die.

For this reason, unlike the carrot root fly with defined danger periods, the cabbage root fly is a problem throughout the season.

There used to be a chemical control called Bromophos that was widely used to prevent fly damage but it was banned back in 2003. There are no chemicals available to the gardener that would be effective

Happily it is fairly easy to keep the fly away from the roots by creating a barrier. For stemmed brassicas (cabbage, cauliflower, Brussels sprouts etc) take a piece of material 4/6″ (10 to 15cm) square.

Fold in half and cut a ½ ” (15mm) hole in the centre and cut along the fold to the centre. This collar can then be laid around the stem of the cabbage creating a barrier to the fly’s maggots. Suitable materials are thin shed roofing felt, carpet underlay or cardboard. Cardboard may rot in wet weather allowing the maggots access.

Normally you only need to worry about cabbages and cauliflowers but if it’s a really bad year for the fly then even Swedes and turnips can be attacked. Cloching with enviromesh or horticultural fleece will effectively keep the little devils at bay.

There are many natural enemies of the immature stages (eggs, maggots and pupa) of the fly, especially beetles. Avoiding using chemicals that indiscriminately kill bugs will allow a build up of the diverse ecology that helps control any pest