Clubroot (also known as swollen fingers amongst other names) is a serious fungal mould type of disease that affects the brassicas (cabbage tribe) and other members of the crucifers, the family to which brassicas belong. There are about 300 species of plants susceptible to club root 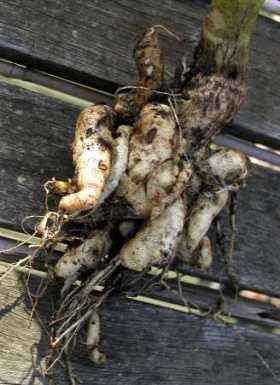 Clubroot has been known about since the 13th Century but wasn’t named until the 19th Century. A severe outbreak decimated the cabbage crop in St Petersburg, Russia and the Russian Gardening Society offered a prize to anyone who could identify the cause and suggest a control for club root.

Woronin, a Russian scientist successfully identified the cause of club root as a “plasmodiophorous organism” in 1875, and gave it the name Plasmodiophora brassicae.

Although usually described as a fungal disease it is, in fact, more related to a slime mould.

It is caused by a soil borne organism Plasmodiophora Brassicae. The organism produces cysts (zoospores) that remain in the soil until a suitable host is available to infect. It then develops and grows, producing more cysts and starting the cycle again.

How does Club Root Spread?

Clubroot is easily spread by transfer of the cyst in soil. Just walking from an infected plot to a clean patch of land with infected soil in the tread of your boots is enough to infect a plot. It is also spread by plants themselves, so only accept brassica seedlings and plants from sources where the land is known to be clear of clubroot

The first sign of clubroot is a wilting of plants, especially in dry weather. As the season progresses, the plants fail to develop well and often fail to develop a crop. These symptoms are quite similar to cabbage root fly attack so a definitive answer will be found by lifting a plant and checking the roots. Clubroot infected they will be swollen and knobbly, like advanced arthritis which is where the old colloquial name of ‘fingers and toes’ comes from.

How Long does Clubroot Last in the Soil?

The cysts can live for up to 9 years in the soil. If, however a plant is infected towards the end of the period, it starts again. Remember it’s not just brassicas but also weeds that are members of the Crucifer family who can be infected.

So once in the soil it can effectively remain a problem permanently with weeds carrying the infection cycle on, even if the plot does not grow brassicas and is well tended.

Because of the lifespan of the cysts, to be effective you would need a totally weed-free plot and a cycle of at least 10 years. Since some people claim a lifespan of 20 years for the cysts, arguably rotation is not a practical way to eradicate clubroot.

Regardless, since the quantity of cysts in the soil will reduce over time a long rotation cycle should significantly reduce the severity of attacks. If an infected root is left in the ground new cysts will be released as soil micro-organisms decompose the root.

Therefore the peak level of cysts may actually be in the second or third year after growing infected brassicas. This means anything less than a 6 year rotation is not worth considering as a clubroot antidote.

There is no chemical cure for clubroot legally available to gardeners. Old tales of using pieces of rhubarb stalk or leaf in the planting hole to prevent the disease have been proven to be ineffective in trials.