February, being the last of the winter months , often has a sting and ends up being the coldest month. So, more than any other month, this one you need to play according to local conditions. It’s best to hold off than try to sow in waterlogged, near frozen ground that will most likely rot any seeds. Watch out for good weather in early February, in my experience it means the end of the month will be wicked.

Sowing & Planting in February on the Vegetable Plot 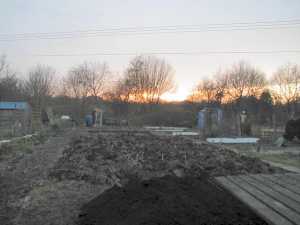 An allotment in February sunset 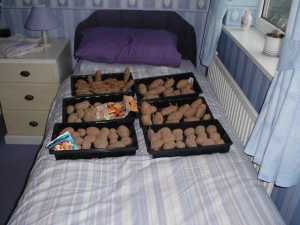 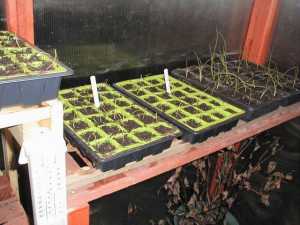 The seed potatoes should be with you by now but it’s too early to plant outside so I’d chit them. Chitting is the process of pre-sprouting before planting. Some authorities say it benefits maincrops but not earlies, some say it’s of no benefit and some it is of benefit to all types. My attitude is that nobody says it does harm and as the seed tubers are with me I may as well chit them.

When you get your seed potatoes you put them in a cool but frost free place where they get some light but not direct sunlight. The potatoes will then grow short stubby shoots to get them off to a fast start when planted out.

Some people suggest rubbing off all but three shoots to help get larger potatoes with the maincrops. I don’t do this myself – knowing my luck I’d lose the remaining three at planting!

There’s a lot of information here on growing potatoes

If the weather allows, you can direct sow your broad beans in February along with early peas such as Feltham First and Meteor for a May / June harvest. This early in the year your best chance would be to start your peas in the greenhouse or a coldframe and plant later.

Jerusalem artichokes and shallots can be planted now, although shallots will benefit from covering with a cloche.

If you have a greenhouse, you can get an early crop of lettuce, rocket and radish away in there. You can utilise cloches outdoors but success will be more dependent on the weather.

Time to sow your summer cabbages such as Greyhound and Primo, as well as turnips and spinach.

Onions from seed should be started now. They need about 15 degrees C to get them going so you may be best using the windowsill in a cool room to start them off.

With a heated propagator or using windowsills you can start off aubergine and peppers, chillies and tomatoes I have often found better results by waiting until March, which I put down to day length but many people feel this is the right time.

As I said for January, the big problem at this time of year is available light. Covering cardboard with aluminium foil and standing it to the north side of the seed tray will reflect extra light and help prevent leggy, drawn seedlings without the expense of special horticultural lights.

There is still time to finish planting fruit trees and bushes, especially raspberries and other cane fruits.

Early this month you can prune apple and pear trees while they are still dormant. It’s also time to prune gooseberries and currants. With currants shorten the sideshoots to just one bud and remove old stems from the centre of the bushes.

If you are in a sheltered area and grow early flowering fruit trees like nectarines, peaches and apricots, protect the flowers with horticultural fleece against frost. You can also use old net curtains for this job. 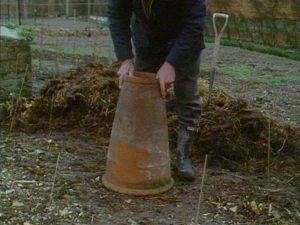 Rhubarb can be forced for an early crop of the sweetest stalks. Just cover a crown or two with large buckets or even an upturned black bin and insulate the outside with straw or manure for added heat. The stalks will grow in the dark.

In years gone by there were specialist forcing pots for this task but a large one like the one in the picture with a lid could set you back £60!

The drawback is that this takes a lot out of the crown and it won’t recover for a couple of years.

The professional growers in the famous Rhubarb Triangle dig up their crowns and take them into huge dark warm sheds to produce forced rhubarb. Once the season ends these exhausted crowns are discarded as it will take them longer to recover than to grow new crowns.

General Jobs on the Plot

If you have finished all the major tasks, such as digging over, creating leafmould heaps etc you will not have a lot to do in February but if like most of us you are scrambling to keep up, this is your last chance before spring.

Double check the greenhouse, ensure the glass is firmly secured and replace any cracked panes etc. If you’ve not managed to give it a thorough clean, now is the time before it is pressed into service.

Check last year’s potato bed for any volunteers (left over small potatoes) and remove them to avoid passing on disease problems and blight.

You’re going to be using your pots and seed trays next, so this is a good opportunity to wash out and sterilise them so you seedlings will get off to the best possible start.

This years potato bed will benefit from a good application of compost or rotted manure that can be forked in or rotavated in to get them away.

You can cover soil with dark plastic sheeting, fleece or cloches to warm it up for a couple of weeks before you start to sow and plant.


Leeks may well be standing ready but if a long freeze seems likely you can dig some up and heel them in to dug ground for easy access – unless we have deep snow!

Parsnips and swedes in the ground can come up when you are ready, cover with fleece or straw to stop them freezing solid into the ground.

The cabbage family should be providing some sustenance with early purple sprouting broccoli, kale and Brussels sprouts still being available. Beet leaves (perpetual spinach) and chards may be available.

Other crops you may have:  scorzonera, chicory, endive, celeriac, celery and Jerusalem artichokes.