Growing Leeks – How to Grow Leeks

How to Grow Leeks – A Guide to Growing Leeks 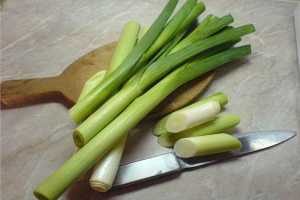 Leeks are very hardy member of the onion family and are grown to gigantic sizes for showing, particularly in the North East of England. But smaller plants are tastier and more tender for cooking Leeks are less demanding to grow than onions but they need very careful transplanting and earthing up to produce long well blanched plants.

There are early, mid-season and late varieties. Early varieties mature from September to November, Mid-Season varieties from December to February and Late varieties from February to April. Sow seeds from each group to extend the cropping season. You can also grow them in large containers or pots and in raised beds .

Pests and Problems with Leeks

Leeks are generally trouble free, but may suffer from rust – a fungal disease causing orange spots on the leaves and Smut caused black blotches. Affected plants should be lifted and burnt. Leek Moth may be a problem in southern England and is gradually spreading north. The caterpillars feed within the foliage and stems or bulbs of leeks, onions and related vegetables.

Leeks are less demanding to grow than onions. They like soil which is rich in humus and nutrients but may rot in waterlogged ground . The white stems of leeks , which are required for cooking , are created by blanching (excluding the light) as they grow. Plants are, therefore, planted in holes in the soil .

Leeks can be sown from March–April outdoors in drills in a seedbed or as early as January under glass in pots, modules or root trainers. Sow thinly and thin to the strongest ones to grow on for transplanting.

Leeks can be planted out during June or July when they are about 4 inches (10 cm) high and about the thickness of a pencil. Using a dibber, or an better still an old spade or broom handle with a square or wedge shaped end, make planting holes 6 inches (15 cm) deep, 6–8 inches (15–20 cm) apart in each direction . Drop a leek plant into each hole – some gardeners recommend trimming the roots so that they drop into the holes easily but others say just to twist the plant gently as you drop it into the hole – the choice is yours.

Do not add soil to the hole but fill it with water to settle the plant in, the leeks will fill the hole as they grow.

You can also trim seedlings leaves a little if you wish before transplanting to cut down transpiration until the roots have established in the soil. Keep the area free from weeds and water in dry weather.

If you want to increase the blanched length of the leek, gently earth up around them but avoid soil getting between the leaves. A collar made from a toilet roll or kitchen roll inner cut lengthways or a piece of newspaper can be fitted around them and held in place with a piece of string or a rubber band before earthing up .

When you want to harvest leeks pull or dig up alternate ones from the row. Leave the rest to grow on for a later harvest . Leeks can be used instead of onions in many recipes. They can be frozen for use later in stews and soups. Surplus seedlings and thinnings are good in stir fries.

To keep leeks available fresh at the end of the season, dig or pull up the remaining crop. Draw a trench about 10cm deep and lay the leeks with their roots in the trench at a 45 degree angle. Cover the roots with loose soil. 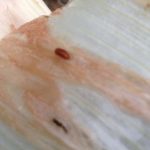 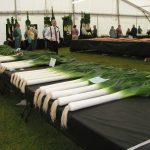 Champion show grower John Trim explains the process of vegetative propagation of blanch leeks which is a fairly advanced technique but this step by step guide makes it easy to understand. Visitors to the top shows are often amazed at the quality...