The allium leaf miner has fast become a serious pest affecting all of the alliums – onion family. It’s primarily a problem with leeks which are its preferred host but it will go for onions, garlic, chives and shallots. It can be devastating to the crop. Allium leaf miner actually became No. 7 in the RHS “Top Ten” list of pests in 2015!

The Allium Leaf Miner was first noted in Poland in 1858 but it’s only in recent times that it has become a significant pest. Possibly a result of climate change providing more hospitable conditions for the pest.

It has spread quickly, being noticed as a problem in Hungary in 1986. By 1990 it was in Slovenia and Croatia moving across into Serbia by 1992. Come 1994 it was in Germany, Austria and Slovenia. In 2002 / 2003 it appeared in Switzerland, France and Britain. It is also in the USA (Pennsylvania and Maryland especially but spreading quickly)

In Britain is was initially picked up in the West Midlands but has now spread widely covering all of the Midlands and South of the country. It has been detected in all of Wales as well. It’s moving north and climate change seems to be aiding its spread.

Initially it was just a garden and allotment pest in Britain but now it’s becoming a problem for commercial growers. According to the RHS there are no chemical controls currently approved for its control available to home growers. Derris (rotenone) and pyrethrin were mentioned as being controls in 2007 by FERA but Derris is now delisted. However, both Derris and pyrethrins are unlikely to be effective due to the lifecycle of the pest. Farmers have access to systemic insecticides that would be effective.

What is Allium Leaf Miner?

The adult is a very small fly with a body just 3 mm long. It is grey / black in colour with a yellow forehead and yellow on the abdomen. The legs are also black except for yellow knees.

The adult lays eggs which hatch into maggots. These are pale yellow in colour, tapering to an eyeless pointed head with a pair of brownish hooks. When fully developed they are about 6 mm long. These burrow through the host plant, leaving tunnels behind.

When fully developed, the maggot pupates. The pupae are are reddish brown in colour and 3 to 4 mm long. These are found near the surface of the host plant inside the leaf tissues. The fly hatches from these and starts the cycle again.

There are two generations a year with summer and winter rests. The fly overwinters as pupae sat within the plant tissues of its host plants.

In the spring, from March to the end of May, adults (from the 2nd generation of the year
previous) emerge from the pupae. Timing of the emergence seems to be temperature dependent.

Mating occurs within 48 hours after the adults hatch. The adults feed from the leaves leaving distinctive small white / yellowish spots in vertical lines on the leaves. The droplets of sap that appear at these bite marks allow the adults to recognize and select the host plant necessary for them. This is a characteristic behaviour of leafminers.

The adult females then lay eggs, inserting them into the leaves. This is the starting point of the first generation of the current year. The eggs hatch into the maggots which eat tunnels inside the plant. They head down towards the roots. Once fully grown, they pupate with the brown pupae at the base of the hole they’ve eaten in the plant.

The flies do not hatch out usually between the end of May until September, this is to protect them from hot summers. It appears this behaviour is controlled by day length rather than temperature and is, therefore, quite consistent.

The adults of the first generation of the current year leave at the end of August and through September, following the same process as above.

How to Tell You Have Allium Leaf Miner

Control of the Allium Leaf Miner

The only practical control is to cover the crop, especially in the danger periods of March to June and September to November, with insect protective mesh or fleece.

If the infestation is detected in the crop, affected plants should immediately be uprooted and burned. Do not compost infested plants, the pupae will still be able to hatch spreading the infection.

If you are growing on an allotment or with neighbours growing vegetables, make them aware of the problem and how to handle it. This will, at least, reduce the fly population and threat. 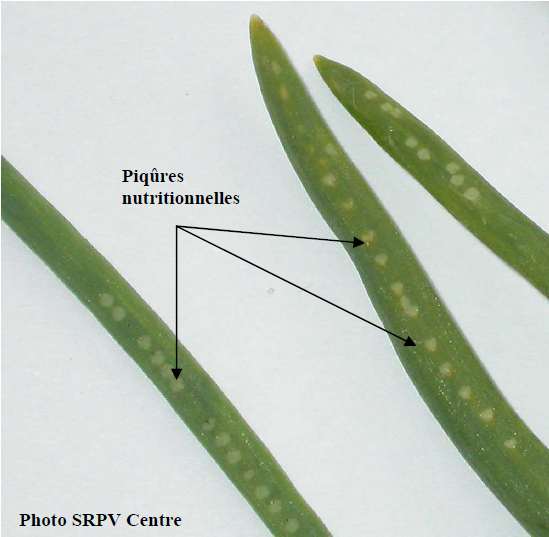 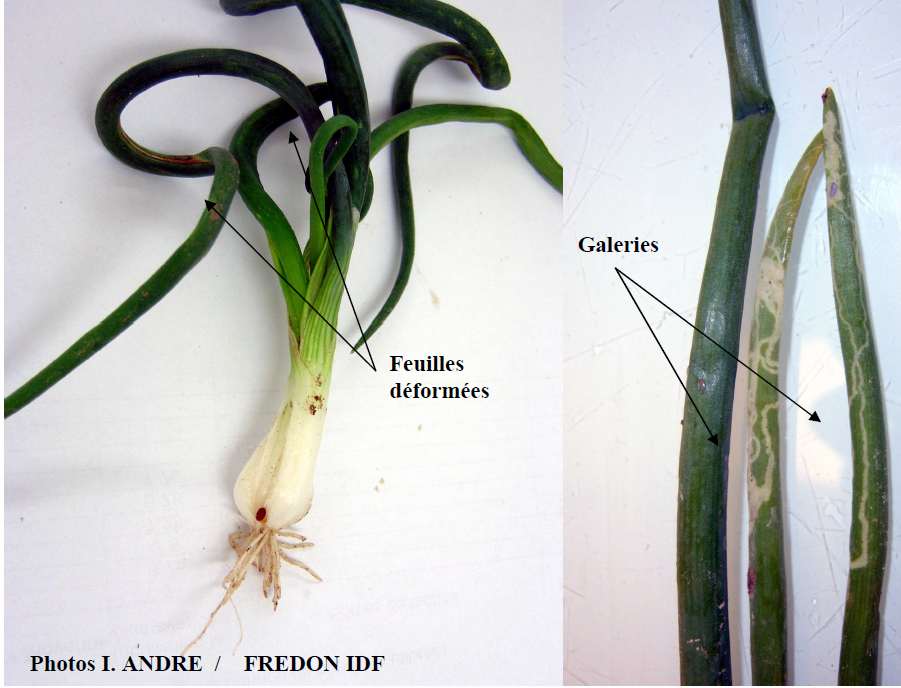 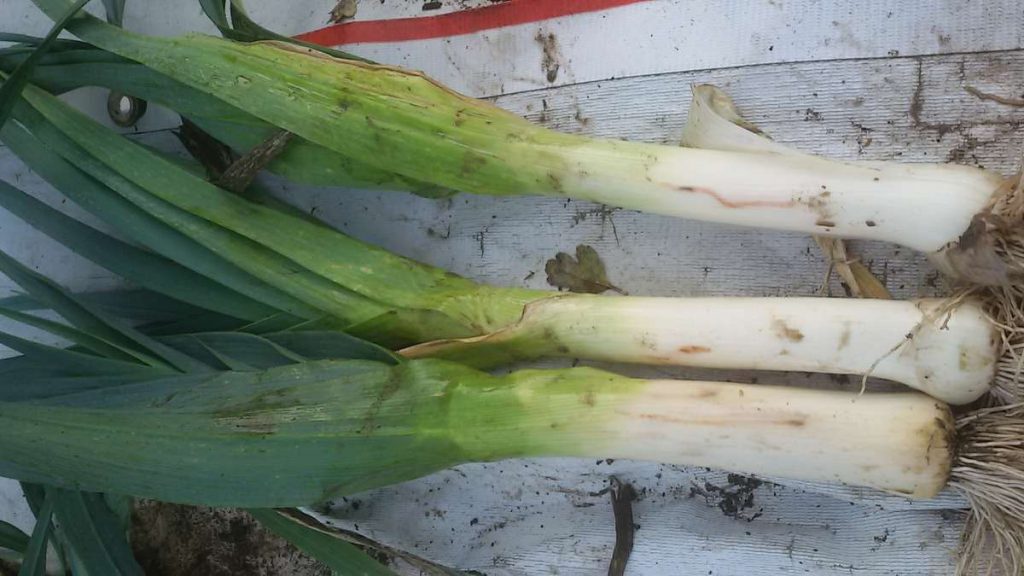 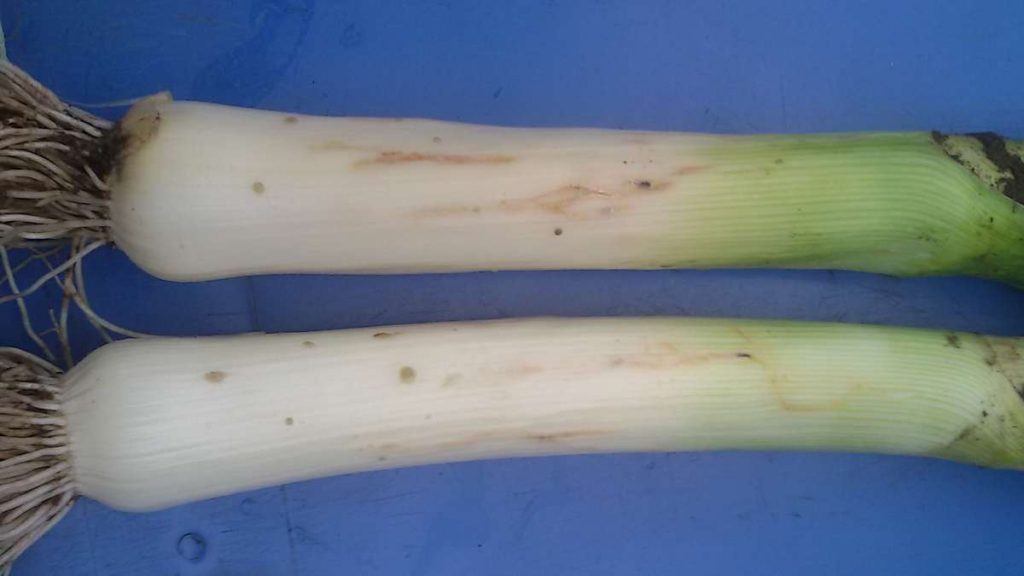 Tracks in Harvested Leeks 2 – Thanks to Stewart Jones for Image 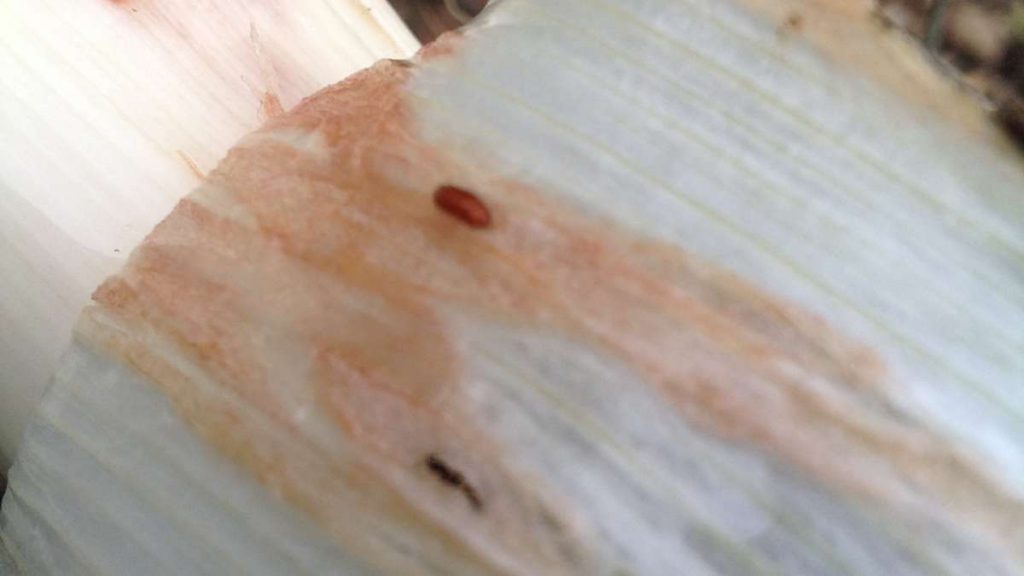 Allium Leaf Miner Pupa – Thanks to Philip Surridge for the Image