September is the end of summer although we’re often lucky to have an Indian summer with blue skies and sunshine, nothing is certain with the weather. The bulk of the harvest comes home now and as crops come out the plot begins to empty

Sowing & Planting in September on the Vegetable Plot 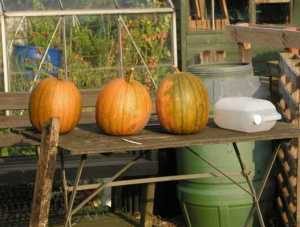 Pumpkins ripening in the late September sunshine on the allotment.

As we leave summer behind and approach autumn, the rush to get things into the ground slows to a near halt, which is not to say that work stops!

This is one of the busiest months with harvesting. It’s worth sowing some winter hardy spring onions ready for spring. I stick with White Lisbon, which never fails me, but make sure you get winter hardy.

You can sow lettuce like Arctic King now they’ll be ready in early spring as well. We think of lettuce as a summer crop but actually they don’t like too much heat and are surprisingly hardy,

Autumn onion sets can go in now to provide an early crop and plant out spring cabbages to slowly develop for next year.

Early September is the time to sow green manures as land becomes vacant. They perform three jobs for you.

If you’re blessed with a light soil then just leave them in over winter. In the spring you dig them in and allow them to rot down for a few weeks. If you’ve a heavy clay soil, dig them in when you do your late autumn, early winter digging.

Following potatoes on with mustard can be useful for curbing eelworm but be aware that mustard is a brassica and best to avoid if you’ve a clubroot problem.

One of the best green manures for winter growth is Hungarian grazing rye. It continues to grow, albeit slowly, in cold weather and should be around 15″ tall come the spring from an early September sowing. Not only will you have a lush mass of foliage but it also produces a mass of roots that will provide humus for bacterial breakdown.

Keep feeding your tomatoes, peppers and cucumbers but it’s not really worthwhile feeding other plants at this time of year as they are nearly finished and the nutrients are best saved for the spring. Keep the side shoots in check on the tomatoes.

Don’t give up on the hoe, it’s far better to how weeds away when you can hardly see them than when they’re established. As the saying goes “Hoe when you can’t see a weed and you’ll never see a weed”

Keep an eye on your brassicas for butterfly eggs and caterpillars, these will most probably be under the leaves. The greenhouse pests should be on the wane but keep an eye out if the weather is good as they can leap back so quickly

September and October are the right time to work on your compost. Usually the cool compost bins will have partially decomposed material at the top and rotted compost at the base.

Take the partially rotted off and then take out the rotted compost to spread on the ground or pile ready to add to the base of trenches when digging over to encourage the worms to deepen your top soil.

The partially rotted goes back in the bin along with fresh green materials (preferably shredded), some manure if you have it and lime in layers. Once a heap is built, cover with cardboard, plastic sheet or tarpaulin and, with luck, you’ll get a hot compost going before the real winter chill hits.

Tidy up the summer fruiting raspberries. Cut off the canes that have fruited and tie in the new shoots that will bear next year’s fruit.

The summer fruiting strawberries can be attended to now as well. Cut off the foliage about 1″ from the ground, clearing and weeding as you go. Any runners can be planted up to replace 3 year old plants that are best replaced now.

The maincrop potatoes may be ready now. When you harvest your potatoes take care to remove all the tubers. Any left will not only sprout next year and become a weed but will also be a reservoir for disease and potato blight spores. It’s often worth forking over a few days after harvesting potatoes because more seem to miraculously appear.

If blight has struck your potatoes the best method to preserve the crop is to remove the haulm and dispose of it then leave the potatoes in the ground for a fortnight or longer to stop the spores getting onto the tubers.

The runner beans and French beans will be continuing to produce until frost strikes. The last of the peas should be coming in as well. Compost the foliage of the peas and beans but leave the roots in the ground as the nodules on them contain nitrogen.

From the greenhouse you should be picking aubergines, chilli and sweet peppers as well as cucumbers and tomatoes.

Other Crops You Could be Harvesting Now