Cause of, Identification of, Prevention of and Treatment of Potato Blight – Phytophthora infestans

Potato blight is the worst problem that the potato grower faces. Once it arrives it can devastate a crop in a day or two and when the infection moves down from the foliage to the potato tubers, cause them to rot as well. 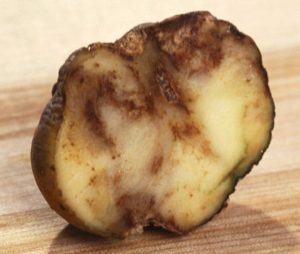 Potatoes infected with late blight are shrunken on the outside, corky and rotted inside They also stink and once smelt, never forgotten.

Most famously the potato blight was, if not the only cause, certainly the major contributor to the Irish Famine of the 1840’s.

The blight had started in Europe and eventually reached Ireland where the potato was a staple food. Worse still, the Irish all grew the same very susceptible variety (Irish Lumper). Not only did they lose crops in the ground but crops in store were lost as well.

There’s a lesson for growers today in the Irish Famine. Lack of genetic diversity and mono-culture increases the risk of devastation. Sadly farmers ignore it at our peril.

Cause of Potato Blight

Potato Blight is caused by the Phytophthora infestans fungus This fungus can also infect other members of the potato family, Solanaceae such as tomatoes. It spreads via airborne spores on the wind until it lands on a susceptible plant and the weather conditions are right for it to develop, warm and humid. 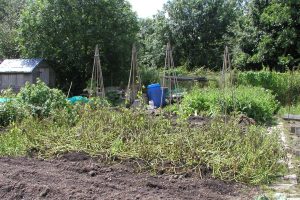 Blighted King Edward Potatoes in July.
One day the haulm is fine, next like this – browning and obviously dying.

Being near to other potato growers increases your risk as there are more spores around but even growers in isolated spots with no nearby potatoes are vulnerable.

If you’ve been growing for some time and you think potato blight is getting worse, you’re right. This is for two reasons.

First the weather. Over recent years winters have been warmer and summers wetter in Britain. The conditions are more favourable to blight than they used to be. Whether this is a long term effect of climate change or just statistical chance doesn’t matter – the fact is the weather favours blight.

Secondly we have more strains of blight than we used to. Until the 1990s we basically had one strain of blight that would change over the years overcoming blight resistant potato varieties. Then another strain of blight was imported in a shipment of potatoes from Mexico.

The two strains mingled and reproduced so producing more strains and currently there are 4 or 5 variants on potato blight in the UK. Very similar to the way flu develops. One year we have Hong Kong Flu and the next another type as the virus mutates. Hopefully we won’t have a blight version of the 1919 Spanish flu which killed more people than the first world war did.

Recently a new, more simple, measure of blight risk known as a Hutton Period has come into use. A Full Hutton Period occurs when the following criteria are met on 2 consecutive days:

By watching for Smith or Hutton periods it is possible to predict when blight is most likely to appear and use that warning for growers to take preventative action. You can get warnings of Hutton Periods from the BlightSpy website 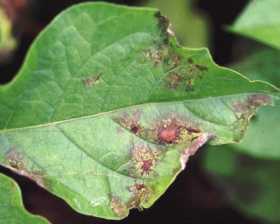 Initial symptom of Potato Blight is small brown patches on the leaves like this.

Initially a spore or more likely a number of spores will land on the potato haulm. In dry weather they lie dormant but when the humidity is right, the fungus starts to grow. You may notice brown freckles on the leaves or sections of leaves with brown patches and a sort of yellowish border spreading from the brown patch.

In a severe attack you may discover that all the foliage is down and brown, starting to rot. It’s frightening how quickly potato blight can spread in the right circumstances.

The blight spores will fall or be washed down by rain onto the soil and any exposed tubers. Once in a tuber it will spread from tuber to tuber and infect the entire crop.

Potato blight affected tubers (the actual potato) by can be told by dark patches on the skin. Cutting the potato in half will reveal brownish rot spreading down from the skin. Eventually the potatoes almost liquefy, becoming jelly like and give off a distinctive stench. The smell of blight is unmistakeable.

Prevention and Treatment Of Potato Blight 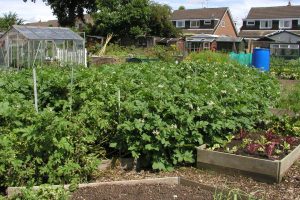 The Sarpo Mira being blight resistant are unaffected.
Photo taken at the same time as the King Edward potatoes above

The blight fungus is generally killed by cold weather although with the new crossbred strains the signs are some are better at coping and over-wintering. The main disease reservoir is infected tubers in the ground or in storage sacks. Wherever it comes from, the spores can travel miles on the wind and there is little you can do if the weather is right for blight.

The traditional spray for blight is easily made Bordeaux mixture as explained in Dig for Victory. I’m not sure this is such a good idea as it contains copper and that is hardly good for your diet although it was organically approved for many years and our forebears survived using it. There are no anti-fungal specifics for potato blight available to home growers without a licence.

If you’re relying on spraying, then it should be as a preventative rather than a cure. When a Smith or Hutton period is reported you spray and at the first sign of blight striking the haulm, remove the affected foliage and spray the rest. You just might get away with it, so long as only a few leaves are affected, there is a good chance of repelling the blight.

If however you don’t win or don’t like using chemical sprays, cut off the haulm and dispose of it. You can hot-compost the haulm but the safest answer is to bin, burn or bury deeply. The potato tubers won’t develop any further but leave them be for 2 weeks nonetheless. This is to hopefully stop the blight spores getting to the tubers as you harvest.

After harvesting and storing, check potatoes regularly for signs of blight and remove any suspect tubers at once from your store.

Since potato blight tends to hit later in the season when the weather conditions favour it, growing first and second earlies can dodge the fungus. Not every year, obviously, but most years they’re out of the ground when blight arrives.

Some potatoes resist the blight better than others, although a lot depends on which strain of blight they get now. Some varieties resist better in the foliage and some in the tubers so crops are measured for both.

The relatively recent development and release to market of Sarpo Hungarian varieties of potato that are extremely blight resistant has been a boon to home growers. I’ve had the Sarpo Mira standing healthily when every other potato on the allotment site had gone down to blight.

Note: Sarpo Mira has the highest rating for tuber blight.