Densely planted raised beds have become very popular in recent years and so potato growing in raised beds has become common but you need to avoid over planting. Ridge planting potatoes is a useful technique to use in wet areas. 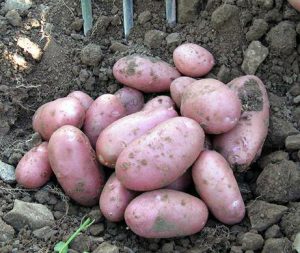 Over the years I’ve experimented with various spacings for potato growing in raised beds. One of the benefits of raised beds being that you can close-space taking advantage of the depth of soil and thereby get more production per square metre. My beds are the standard 1.2 x 3.0 metres (4′ x 10′)

The optimum spacing is to have two rows 30cm in from the side with 60cm between, when growing maincrop varieties. For early varieties, three rows, 15cm in from the side then 45cm apart. With both early and maincrops space along the rows as normal. Tightening up the spacing reduced eventual crop weight and increasing had no benefit.

The main problem with the raised bed is that there isn’t enough spare soil or compost to earth up with. Usually the close spacing provides a dense haulm cover, keeping the light out. You could try combining the straw mulching method with a raised bed but I found it easiest to apply a mulch of grass cuttings when the haulm was thinning or removed.

Grass cutting mulch is fine but do ensure that the grass isn’t seeding when cut or you’ll have a weeding problem to deal with. Do not use grass cuttings if you’ve used a selective weedkiller on your lawn.

This works well with lighter soils but can be made to work on heavier soils. If you have a heavy soil and a rotavator you can get the whole of the potato bed’s soil into a fine, soft tilth although you may need to go over it a few times.

Draw up the soil into V shaped ridges, at the normal spacing of 60cm for earlies and 75cm for main crops between the ridges. Don’t slope your ridges too steeply or they may collapse in a rainstorm. To make them higher, spread further apart.

Just plant into the top of the ridge at the normal spacing of 30cm for earlies and 40cm for maincrop varieties. The roots should go down into the soft soil of the ridges and when the haulm has grown, it should exclude light from any tubers on the surface of the ridge.

I first saw this method used by a neighbour who had lived in a particularly wet part of Ireland. I wondered why he was digging trenches and making piles of soil. It just didn’t make sense.

His son was no use, offering the explanation ‘because Dad’s Irish‘ – eventually I caught my neighbour who explained the benefits of this method when growing on boggy land. I didn’t point out our soil was sandy and well drained!

The benefit is that the plants being above ground level do not get waterlogged and rot in wet weather. With the monsoon summers we have had recently, an excellent idea but not so good if the summer is dry as watering is more difficult.