Potatoes are nearly 80% water so it should come as no surprise that they are thirsty plants as well as greedy. Like tomatoes, who are members of the same family, Solanaceae, irregular watering is very bad for the development of the tubers.

Hollow Heart – A hole Inside the potato tuber. 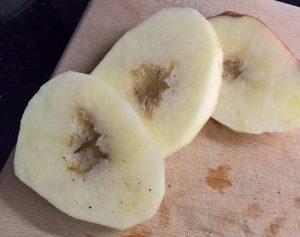 This problem presents as a hollow inside a potato that otherwise looks normal, hence the name Hollow Heart. It’s caused by a dry spell checking growth of the tuber followed by a prolonged wet spell. It’s similar in some ways to blossom end rot in tomatoes in that the uneven supply of water causes problems in calcium distribution and availability.

Usually it is only the large tubers that are affected. Often the internal cavity in the potato has a brown coloured surface. The affected potatoes will not store well so if a tuber is found with a hollow inside, it is best to use the largest tubers first.

The only prevention is to water well in dry weather. Remember that potatoes are a thirsty crop and require more water than many other crops.

This is another problem of irregular watering. Most often the cracks or splits will have skinned over and the biggest problem will be in peeling them. If, however, the splits have occurred late in growth and not skinned over, the potatoes will not store well and should be used first.

This is a problem that can be caused by lack of water as the tubers are developing but it can also be caused by virus infection or a lack of trace elements in the soil.

If it occurs despite the plants being properly watered and the crop rotated annually as it should be, application of a trace element fertiliser like Chempak Trace Elements may cure it. Alternatively, for organic growers loathe to apply any chemicals good compost made from a variety of materials may provide whatever is lacking.