Potato wireworms look at first glance like small, thin earthworms. They are about 25mm long and on close examination you will see three pairs of forward-facing, tiny, short legs at the front which are more like mouthparts than legs. 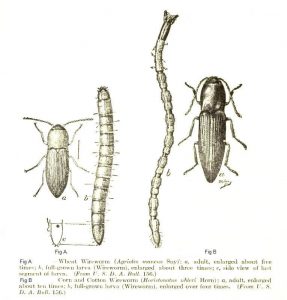 They burrow into the potato leaving holes which allows rot and other diseases access. Wireworms can attack other root vegetables, especially carrots, leeks and the stems of seedlings just below the soil.

What are Potato Wireworms?

Wireworms are the larval stage of click beetles and come from a number of different species; Agriotes lineatus, A. obscurus, A. sputator and Athous haemorrhoidalis. The exact species is really irrelevant to the gardener though since they are all similar in appearance and damage.

In the wild click beetles live in grasslands so they tend to be problem where pasture or lawn is converted to being a vegetable plot or the plot is bordering grassland. Grass paths can also be a problem as the wireworms migrate from the grass into the growing areas.

Thorough cultivation exposing the wireworms to the surface where birds can get them will reduce the population. If you keep chickens, run them over the plot. If wireworm is a major problem or you’re in the first couple of years after converting grass to plot, it’s worth forking over the surface three or four times over a week to expose as many wireworms as possible.

The best time for this is March and April so it can be worth delaying planting of potatoes until May. Even then, disturbing the soil between the rows with a three prong cultivator or deep hoeing is helpful as it exposes yet more to the birds.

Crop rotation combined with good cultivation should gradually reduce the problem of wireworms to insignificance in three or four years but there may be a way to speed the process. Sow a crop of mustard and as it starts to flower between July and October, dig it into the soil.

The theory is that the wireworms will be so well fed that they will mature in the one season and turn into click beetles that will fly away to their natural grasslands leaving the potatoes safe for next year.

Remove potatoes from the ground as soon as they are mature to reduce damage. Early varieties, being in the ground for less time, are more likely to escape damage than maincrop varieties.

You can also consider growing potatoes in bags until the worm population has declined.

Wireworm traps can be helpful. Take an ordinary potato and cut into halves or quarters for a large one. Skewer the potato and place a couple of inches (5cm) under the soil. These should attract the worms and after a fortnight or so remove them to the bin or chicken run.

Farmers do have some chemical controls available but home and organic growers can use a biological control. The nematode heterorhabditis megidis which is used for the control of chafer grubs is said to be effective against wireworms.

Although there have been, to my knowledge, no trials of different varieties resistance to wireworm attack my experience is that the dense flesh of Sarpo Mira was unaffected by wireworm. Sarpo Mira was also resistant to slugs so varieties with slug resistance may be worth growing on affected plots.