Can you chit supermarket potatoes?

I was asked, “Can you chit supermarket potatoes or do you need to buy special seed potatoes and what is the difference please?”

Seed potatoes are not the same as supermarket eating potatoes, which is why they’re more expensive. 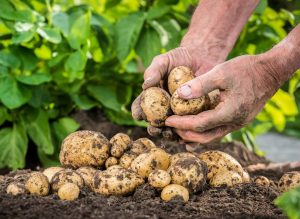 Potatoes are such an important crop that they’ve been controlled by government regulations since before the Second World War – possibly earlier but I’m not sure. Currently the Seed Potato Classification Scheme provides classification of all potatoes produced and marketed in England and Wales, depending on the class of the parent seed, and the health of the crop and tubers.

The purpose of the Seed Potato Classification Scheme (SPCS) is to make sure that seed potatoes are true to the variety and healthy so as not to harbour and spread diseases. The best seed potatoes used to come from Scotland where the lack of disease spreading aphids kept the crops healthy. See this government page on the SPCS for detailed information on the scheme.

With modern techniques like tissue culture and us currently having free trade within the EU seed potatoes can come from anywhere within the EU. They must, however, comply with the agreed standards and appear on the national variety lists. These lists were brought in to stop the practice of the same varieties being sold under different names.

Seed potatoes are also, usually, about the size of a hens egg. Roughly 12 to a kilo, which is far smaller than bagged supermarket spuds. They will probably have been cold-stored to prevent premature sprouting but once they arrive in the garden centre they’ll be starting to awake from their dormancy.

Supermarket potatoes for eating, also called ware potatoes, do not need to comply with the same stringent standards as seed potatoes and may possibly harbour disease. Not disease that would affect people but things like the viral infections that potatoes are susceptible to.

Another problem is that eating potatoes for sale in supermarkets may be treated with chemicals like Maleic Hydrazide to prevent sprouting. This renders them useless as seed potatoes.

For best crop hygiene you should always use fresh certified seed each year and not potatoes sold for eating. Neither should you save your own seed potatoes from your own crop.

What I do in practice

Generally I use fresh seed potatoes each year. There are exceptions, one year the seed stock of the variety Anya I received was pathetic. They were tiny and many were damaged. So much for a specialist supplier. I don’t think he’s still trading.. wonder why?

We had some Anya bought from the supermarket that were sprouting so I knew they were viable and planted them. I got a really good crop with no disease problems. Most ware (eating) potatoes are potato disease free, but it’s not guaranteed.

I do use my own seed tubers occasionally, so long as the crop was healthy and disease free. But only when I’m having problems getting fresh seed stock and I don’t save seed tubers year after year. That’s really asking for trouble as disease will build up over time.