I suppose the great news of the week is the suspension of Aminopyralid based herbicides. Not an outright permanent ban, but a positive step forward for us gardeners.

Unfortunately, I do not think we can trust manure until 2011 or even 2013. Assuming all the farmers who have stocks of this stuff are notified and stop using it, a big assumption, then it is still going to be in the chain. I don’t know if the farmers get a refund on returns, but if they don’t then I reckon they’ll use up stocks. After all, it’s an effective product for them and we know farmers have been very hard pressed financially.

Anyway, assume no more Aminopyralid is used from now on. Hay will be harvested and used next year. Herbicide will be excreted into manure and this can then be stacked for a three years before being safe. So, we need to be really careful until then.

Some people seem to assume I’m some sort of expert – I’m not. I just spent some time researching this problem and bringing it into the light. The only advice I can give is to try and check the provenance of your manure, which is far easier said than done, and to test by growing a tomato or potato in the manure before spreading it over your plot. Not so easy in the autumn.

On the allotment front generally, the news isn’t so great. In the parliamentary debate on 22nd, Ben Chapman summed it up with “There is certainly no evidence from my own constituency or from research that I have conducted that there has been a widespread, consistent attempt by local authorities to provide new allotments to keep up with demand.” Hansard

Back on my plot, the last couple of days have been spent harvesting. Got the garlic up which is generally lovely. Good sized bulbs despite the garlic being struck badly with rust at the end. I think I should have got them up a week or two ago, because a few had rotted. Some of the rotted have a white mould on them. I just hope it isn’t ‘whiterot’ which I think I’ve got on the other plot as some of the onions were affected.

Apart from a lot of weeding, boy don’t they grow? I got a fantastic crop of carrots from my blue half barrels. Left the tiddlers to carry on growing but still ended up with 3 carrier bags full. 1 per half barrel. Not bad! I’ve grown a French variety called Touchon (bought in France) and I’m really pleased with them. No idea if they’re an early or maincrop but they’re nicely shaped stump carrots and of a good size.

I’ve been harvesting my Anya second early potatoes. Now last year was awful, blight hit the potatoes and the crop was poor. This year has been my best ever so far. From 4 rows (60 foot row total) we’ve had 2 wheelbarrows full. I don’t know the weight – but maybe 50 Kg.

Few damages, the slugs haven’t been bad at all this year (so far). Anya store well but I can see us giving a load away. Val spread them on the lawn on an old shower curtain to check them and remove any that would not store, before bagging up for the shed.

Larry gave us a load of paper sacks, I think he gets them from a chippy, which will help as we’re going to run out of hessian sacks. Only trouble with Anya is that they are small potatoes and productive, so harvesting is hard work to make sure no travellers are left in. My sciatica has returned.

Photo Below: Val sorting the potatoes – more in the photographs section. 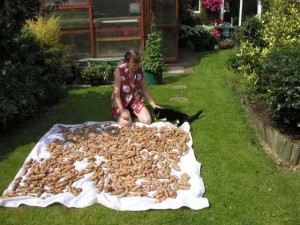