A lot of new home growers are surprised to see flowers and green tomato like fruits on their potatoes. With a little explanation, all will become clear. 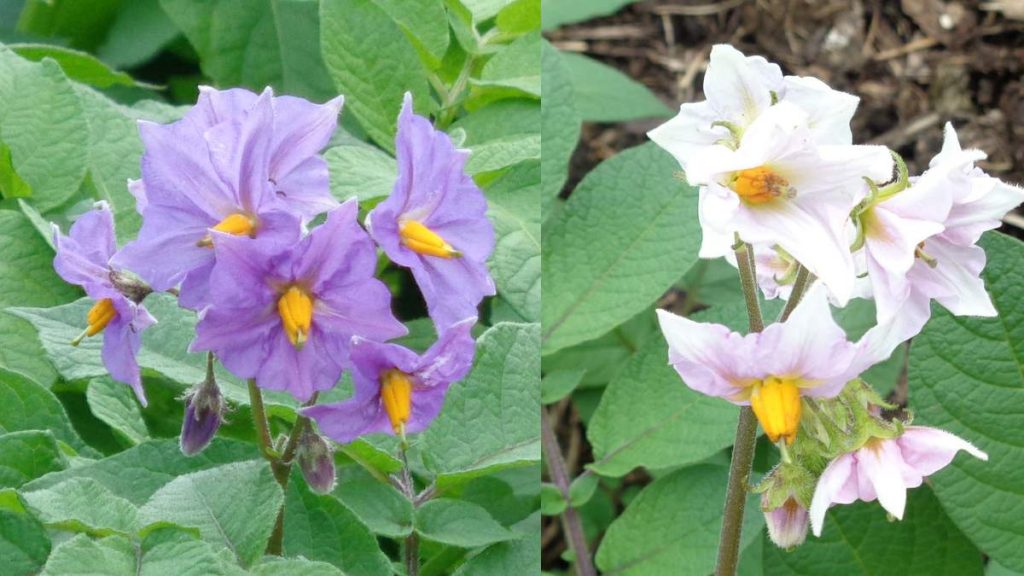 The potato reproduces in two ways; tubers and seeds. Nature loves a ‘belt and braces’ approach to keeping the species going and potatoes are no exception. If the seed fails, the tubers may well survive to keep the species going.

As a growing potato plant approaches maturity, it produces flowers. Incidentally, some of these flowers are really very attractive and they come in a range colours. The flower can be helpful when trying to identify a variety. If you look at the shape of the potato flower, you can see that it is the same shape as a tomato or aubergine flower. This is because they are members of the same plant family, the Solanaceae. There’s more on plant families here.

The flower serves a purpose for the grower as well. Potato flowers indicate tuber-initiation. In other words, potato flowers tell you that the plant is starting to produce the tubers we grow them for under the soil. 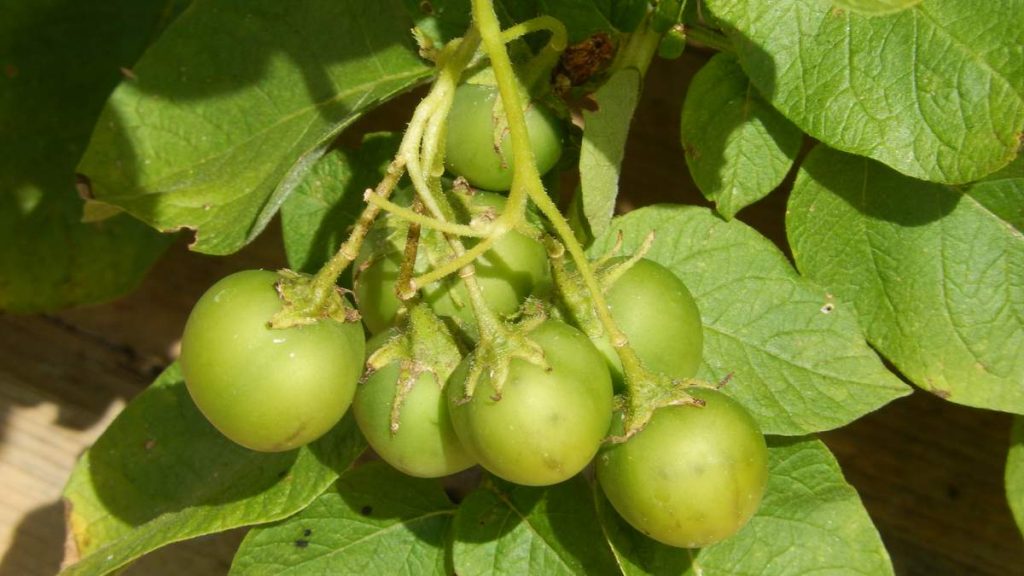 The flower can then pollinate either with itself or with pollen from another plant and goes on to produce a fruit (technically a berry) that looks similar to a green tomato. N.B. The potato berries are not edible. Seriously, DON’T TRY!

The seeds can be extracted from the berry and grown on to produce new plants. These will vary and may be exactly the same as the parent plant or completely different. This variation is how plants adapt to altered circumstances such as different climates.

The potato came originally from South America. Over the years it has been bred to grow in different climates across the world. Breeders cross breed with another variety to hopefully produce a new variety with the characteristics they want. Perhaps increased yield or disease resistance. By selective breeding we now have varieties like the Sarpo potatoes with their high resistance to potato blight.

If you deliberately produce seed yourself you may end up with fantastic new variety but the odds are against you. Professional breeders produce many thousands of plants in the hope of finding that super variety. Even for them, it’s a gamble.

I’ve never bothered producing potatoes from seed myself, there are hundreds of varieties out there already and I’ve yet to try more than a small fraction of those. But if you are interested in breeding new varieties of potato, I’d recommend Rebsie Fairholm’s blog for well-presented and detailed technical information.

Potato Tubers are Identical to the Parent

Whilst all this seed production is going on aboveground, under the surface the plant’s producing the tubers, the spuds we eat. As gardeners know, or soon find out, it’s almost impossible to find every one when harvesting. Those left behind will often grow into a plant the following year. They’re generally known as ‘volunteers’.

The tubers are genetically identical to the parent plant so, if used as seed potatoes, will reliably produce identical plants year after year. If you plant Arran Pilot today it is exactly the same as the original Arran Pilot potato bred by Donald Mackelvie back in 1930.

Whilst you may well buy ‘seed potatoes’ these are actually just the same potatoes you’ll hopefully be putting on your plate. They’re graded for size and carefully grown to be disease free though.

Disease is the big problem with potatoes. Like all common crops they gather their share of viruses and problems like blight. Generally it’s not advised to save your own seed tubers because of this. Having said that, I find it’s worth saving my own seed potatoes so long as the crop is disease free. I do go for new stock at least every three years though, just to be safe. The tubers are great at holding viral diseases and nematodes which will eventually build up and create serious problems.