Visit to the Home of Sarpo Potatoes

I was invited to the Henfaes Research Centre near Bangor, North Wales where the trials of new Sarpo potatoes take place by Dr David Shaw, Research Director for the Sarvari Research Trust. Sarpo potatoes are blight and disease resistant which makes them ideal for organic growers. 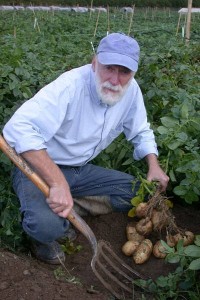 Potatoes are a staple food but getting them to the shelf in the shop requires a lot of chemical inputs and labour. They’re subject to weed competition, virus diseases transmitted by aphids, pest damage from slugs etc. and potato blight. Just preventing blight can involve the farmer spraying 20 times during the season!

The Sarpo varieties are very vigorous so they need little weed control. The heavy foliage smothers weeds. They resist virus disease and most importantly blight. Although they don’t mention it, my experience with Sarpo is that they also resist slug and worm damage. They also store well at moderate temperatures which saves the cost of cool storage for commercial crops. 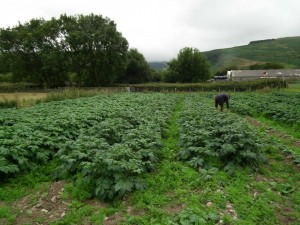 The first variety to be listed and generally available was Sarpo Mira. It gives huge yields and during a heavy blight year my Sarpo Mira was the only potato crop standing on the entire allotment site towards the end of the year. The problem with Mira is that it has an unusual texture which puts many people off.

We found that they didn’t chip or roast well but they made excellent mashed potatoes and dishes where you want the potato to hold together like Lyonnaise potatoes or leek and potato pie.

Since Mira was listed five new varieties sharing the disease and blight resistance have been introduced with flavours and texture more acceptable to the public. Gelf Alderson, the head chef at River Cottage said of the new varieties “..Danube, Shona and Axona are way above the standard of main crop organic potatoes, so I look forward to spreading the word” 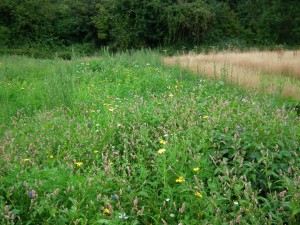 When I arrived at the centre I found Dr Shaw out on the research plots. I must admit to being taken aback by the first plot, there were patches of potatoes in a mass of weeds. All became clear when he explained they were looking at the attractiveness to insects of the potato flower against wild flowers.

Around the edge of the field I noticed some tomato plants growing. It was no surprise, considering I was with an expert on blight, to find they were Crimson Crush. That’s the new blight resistant variety that Dobies are marketing. Like mine, the plants aren’t doing too well which is due to unusually cool weather we’ve been having with some very low night temperatures. My greenhouse grown Crimson Crush are about twice the size.

The main trial field had some weeds between the rows but the haulm was effectively smothering them around the plants. What struck me most was the health of the plants. The soil is hardly ideal, not quite as stony as mine but nearly so, yet the plants were obviously happy. 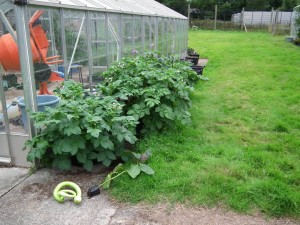 Alongside the greenhouses they were growing different Sarpo varieties in large tubs. This gives absolute control over the growing medium so the performance of each variety can be compared. Once again the quality of the plants was superb.

We also ventured into a polytunnel where Dr Shaw was growing various squashes and other plants. He’s an enthusiastic gardener as well as a top scientist. He kindly gave me some tomatillos and a couple of trombone courgettes to take home along with a tree tomato plant, which I’ve not grown before. You can see them by the potatoes in pots in the photo where I put them down to free my hands for the camera.

All in all, a fascinating look into what goes on behind the scenes to give us the varieties of the future. There’s more information on the Sarvari Research Trust web site.

10 comments on “Visit to the Home of Sarpo Potatoes”