How Many Seed Potatoes are Needed

There are three main factors to take into account, which are covered below. 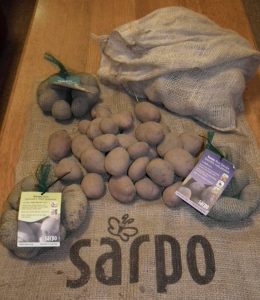 How many Potatoes do you Need to Grow?

Potatoes are one of our staple crops. There was a time when people ate potatoes at least once a day. Now we eat more varied staples like rice and pasta instead of potatoes. Because people did more manual work and walked a lot more, they also ate more at each meal than we do now.

Average general consumption statistics aren’t particularly useful. We’re all different and so the best way to estimate how many potatoes to grow to be self sufficient, estimate what your family eats. As a rule, 2 people will eat around 400 to 500 grams of potatoes per meal.

Eating potatoes three to four times per week would, therefore, give an annual consumption for two people between 60kg and 100kg That’s quite a wide spread, but it does give a ‘ball park’ estimate to work with.

If you’ve got a full 10 rod allotment, 300 square yards or 250 square metres, then with a traditional three course rotation you would have a third of that space available for potatoes and other root crops. Many plots now are half size or something in between. There’s no point in buying seed potatoes you haven’t the room to plant.

The Dig for Victory plan allowed for 3 rows of earlies and 6 rows of maincrop, each row being 30 feet (9.14 metres) long. This plan allocated about 60 square metres to potatoes and would have produced around 45 kg of early varieties and 160 kg of maincrop potatoes.

Some potato varieties produce a usable crop in as little as 12 weeks and are known as early varieties. That includes second earlies which take a little longer but all earlies are treated the same for spacing. Others are called maincrop varieties and usually take 20 to 26 weeks to produce their crop.

Early varieties produce less crop per plant than maincrop varieties more which also generally store better. Earlies will keep for a while but are best used to bridge the gap between the stored crop being finished and the maincrop arriving.

Early varieties have an advantage of maincrops in that their crop is usually ready before blight becomes a problem. Having said that, with resistant varieties like the Sarpo family, blight is not as much of a concern as it used to be.

Some varieties are more more productive than others. Sarpo Mira are a blight-resistant, vigorous maincrop that give huge yields. Orla is unusual in that it can be harvested as an early or left to bulk up like a maincrop variety. Check individual descriptions when buying.

The ideal seed potato tuber is about the size of a hen’s egg. The standard is that the tuber will fall through a 55 mm square, but not through a 35 mm square. This means that the number in a kilogram could be as low as 8 but equally could be as high as 16.

Generally expect 12 to 14 tubers per kilo. Don’t worry if the tubers are on the small size, once the plants get going it won’t make any real difference to the crop. Large tubers can be cut to provide more plants. See Largest Yield from One Seed Potato Competition

Method to decide how many seed potatoes to order.