Cause of, Identification of, Prevention of and Control of Potato Common Scab

The good news about potato scab is that it usually looks worse than it actually is. The scabs or galls are raised crater-like patches on the skin of the tuber with rough edges. Sometimes just a few but in a bad case they cover the the skin. The flesh though is rarely affected and, after peeling, the potato is perfectly edible. 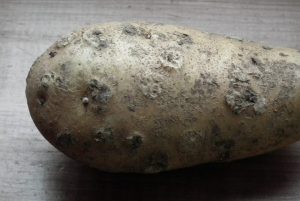 Cause of Potato Scab

The cause of common potato scab is a bacterium, Streptomyces Scabies, found in the soil. It is most common on light, sandy soils, low in organic matter.

Soils that were previously grassland are particularly liable to having the disease.

Unlike most of the other vegetables who prefer a pH approaching neutral (7.00) potatoes are best grown in soil with a pH of 5.5 which discourages the Streptomyces Scabies bacteria and therefore the scab. Fertilising with sulphate of ammonia or superphosphate will acidify soils and should be considered for limey soils with a naturally high pH. Do not lime soil prior to planting potatoes unless the soil pH is very low, below 5.00.

Avoid excess use of nitrogen rich fertiliser such as sulphate of ammonia as over-application of nitrogen delays the onset of tuber bulking which prolongs the period that the plant is susceptible to scab.

Increasing the level of organic matter in the soil and thereby retaining moisture in the soil combined with regular watering, ideally each day for the first six weeks after planting will also reduce the severity of symptoms. Keeping the seed tuber skin wet stops the disease taking hold

Crop rotation will also assist in control of potato scab. Growing potatoes in the same place over consecutive years will build up the level of bacteria in the soil. Be aware that radishes, beets, turnips carrots and red clover are all capable of carrying common scab.

There are no chemical controls available to home growers.

If common potato scab is persistent problem on your plot then consider growing resistant varieties of potato in addition to the control methods above. Resistant potato varieties include: