When planning your crop rotation you need to know what family the various plants belong to. Plants within the same group tend to have the same requirements and suffer from the same pests and problems. 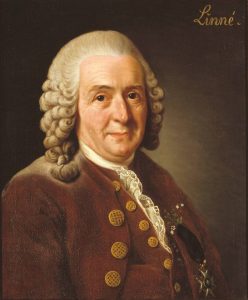 Linnaeus who first started classifying plants and animals into families.

For example, clubroot affects brassicas, the cabbage family, but did you know Swedes, Turnips and Radish are brassicas? They look more like a root crop than a cabbage!

Blight is mainly thought of as a problem with potatoes, yet it affects tomatoes just as badly, once again members of the same family, Solanaceae, as are aubergines.

The list below should help you identify what crops need to go together in the crop rotation.

Species not listed above, like sweetcorn, can be considered out of the family groups and safely intermixed with them. Salsify and scorzonera are members of the Compositae family but best considered as Umbelliferae along with the parsnips.