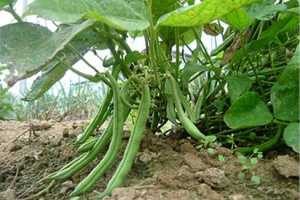 There are dwarf and climbing varieties of French beans. You can grow them either to eat fresh, or to be dried and stored (often called haricot varieties). They are all members of the legume family.

Climbing French beans are grown in the same way as Runner Beans, so this page concentrates on the dwarf varieties. These are easy to grow, and because they can be spaced closely, are very suitable for being grown in containers.

Pests and Problems with French Beans