Growing Calabrese – How to Grow Calabrese

How to Grow Calabrese – A Guide to Growing Calabrese 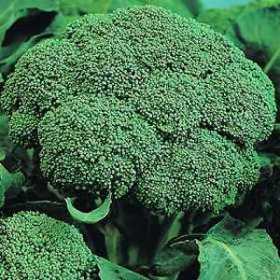 There is a lot of confusion over the difference between broccoli and calabrese . The easy way for gardeners to remember is that broccoli is an over wintered crop and calabrese produces its crop the same year it is sown, before winter starts.

Pests and Problems of Calabrese

Like most other brassicas they are affected by clubroot and, if this is a problem on your vegetable plot, you should read the growing with clubroot article. The usual brassica pests need to be considered too but in general they are an easy crop to grow.

Prepare a sheltered, well drained, full sun position for calabrese by adding plenty of well-rotted farmyard manure or compost to the soil to improve structure and fertility. Calabrese can be sown in a well-prepared seed bed from March-June at a depth of ½” (13mm) and spaced 12″ (30cm) between rows. Then transplanted to its final positions about 5 weeks later, – when the seedlings have four or five leaves .

But, as calabrese resents root disturbance, sowing is best done under glass in early spring in modules or pots and planted out at a spacing of between 18 inches (45cm) to 2 ft (60cm) each way depending on variety , in June-July giving a crop from August-October. Cover with netting to prevent attack from birds and insects.

Most varieties of calabrese will give you two crops from a single plant. First the large central dome will form . Harvest this before the beads begin to loosen. The plant will then produce secondary small side shoots that can also be harvested for a second crop of delicious spears .

Calabrese is better steamed than boiled to retain its flavour and texture. Small spears are delicious stir-fried. The thick stalks are wonderful for making soups like this Broccoli & Stilton Soup

Broccoli is considered to be one of the “super foods”. A number of studies suggest that it can help to protect you from bowl cancer, one of the biggest cancer killers in the UK today . Broccoli contains a chemical called sulphoraphane which is thought to help against colon cancer by neutralising cancer-causing substances found in the gut.

In a study published in the British Journal of Cancer (published by the research journal Nature) the researchers show that in laboratory tests, a compound called indole-3-carinol (I3C), found in broccoli, cauliflower and cabbage can increase the levels of BRCA1 and BRCA2 proteins that repair damaged DNA. This is helpful against some forms of cancer including breast, ovarian and prostate cancers.