How to Grow Courgettes (Zucchini) – A Guide to Growing Courgettes 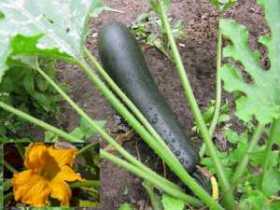 Courgettes are one of the cucurbits which also include: marrows, squash and cucumbers and are grown in the same way. They are prolific croppers and are suitable for growing in containers.

Courgettes may fail in poor weather if pollinating insects are few but the F1 hybrids will set fruit without pollination.

As well as standard shaped green courgettes, you can grow yellow and ball-shaped varieties too.

Courgettes can be sown during late April indoors or March–May outside in 3 inch (8 cm) pots. Sow three–four seeds and keep the strongest two (which will be plenty for a family). Sow the seeds standing on their edge to prevent rotting. Move plants to their final site when there is no more risk of frost.

They can be grown in a large container but if you are planting in the ground, allow 2½–3 feet (75–90 cm) between plants.

Remember that courgettes need a lot of food and water so feed them regularly with tomato feed once they start cropping during June – October.

Pests and Problems with Courgettes

Courgettes are mainly trouble free, but they are susceptible to cucumber mosaic virus and powdery mildew. Slugs are probably your biggest enemy.

Courgettes are varieties of marrow that have been developed to be at their best when immature so don’t leave them on the plant to grow large because will have an inferior marrow and the plant will stop producing fruit . You can put a large cloche over them later in the season to extend their cropping . Harvest cylindrical varieties when they are about 4 inches (10 cm) long. Pick regularly to keep the plants in production. The flowers can also be eaten.

They can be eaten raw , thinly sliced or grated with salads or cooked in many ways including delicious courgette loaf. The bright yellow flowers can be picked before they full open , stuffed with herbs and cheese and fried quickly or dipped in light batter and deep fried tempura style. Or just toss them in olive oil until slightly wilted, then stirred through a risotto. The flowers don’t last so pick and cook them on the same day.