In 1621 the writer John Goodyer wrote of the Jerusalem Artichoke, “…in my judgement, which way soever they be drest and eaten they stir up and cause a filthie loathsome stinking winde with the bodie, thereby causing the belly to bee much pained and tormented…. more fit for swine, than men.”

This may be a little harsh but the truth is that they can have quite a dramatic effect, giving them their nick name of ‘fartichokes’.

The flavour is described as smoky nuts and honey and they have become quite a gourmet dish but they are not to everyone’s taste. Before growing them it is as well to try a few meals and see how everyone likes them.

They are grown in the same spot each year, for if you miss a tuber it will grow like a volunteer potato, so prepare the ground well with plenty of manure which you can top up as a mulch in winter.

Be careful where you site them, the foliage easily reaches 2 metres and 2.4 metres is common. They stems are quite fragile and you will need to provide support with stakes and string in windy locations.

In the autumn the foliage starts to change colour and should be cut down to about 30cm (12″) above the ground as a marker. You can leave them in the ground to dig as required. They are quite a productive crop, 3kg from one plant is typical so you don’t need many seed tubers.

The best variety is Fuseau, which is less knobbly and so easier for the cook. You can save your own tubers to plant in subsequent years but the chances are that you will have missed one when harvesting that will grow anyway.

You are unlikely to find any other variety on sale except for Gerard which is lower yielding but said to have a superior flavour. Swapped tubers may be older, more knobbly varieties. 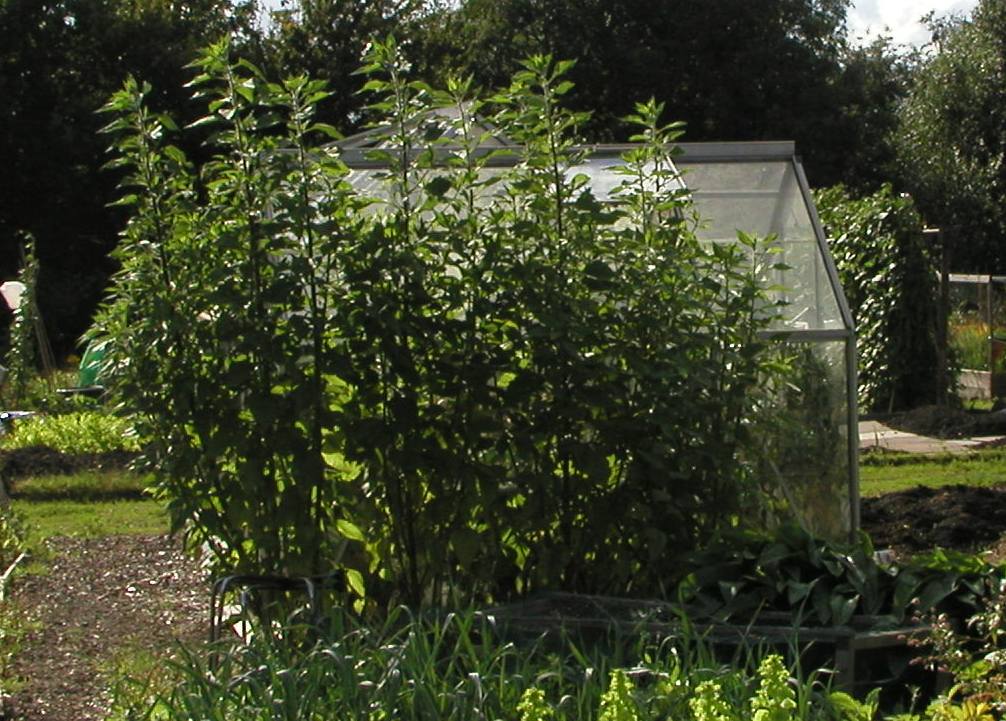 Jerusalem Artichokes Fully Grown in front of my greenhouse