Growing Broccoli – How to Grow Broccoli

How to Grow Broccoli – A Guide to Growing Broccoli 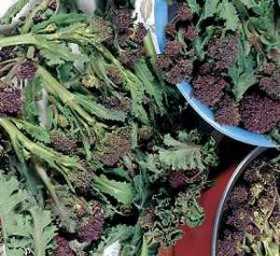 There is a lot of confusion over the difference between broccoli and calabrese . The easy way for gardeners to remember is that broccoli is an over wintered crop and calabrese produces its crop the same year it is sown, before winter starts.

Both are brassicas and our general brassica growing instructions can be followed.

Like most of the brassicas they are affected by clubroot and, if this is a problem on your vegetable plot, you should read the articles on clubroot listed below as well as the articles on general brassica pests and problems

Sow seeds between April – June. Sow them into trays or a well prepared seed bed in drills 1cm (1/2″) deep spaced 30cm (12″) apart. Cover seeds with a fine soil and keep moist during germination. Plant out in early summer for a crop in the following February/March through to May.

A sheltered site is best for them as they have to stand over winter. Earth them up around their stems to about 10cm (4 inches) to help prevent wind rock. If the site is windy staking them is a good idea.

Keep them netted or the pigeons will thank you for a tasty meal. Broccoli grows slowly but is not a very hungry plant. Improved results can be achieved, though, by giving a liquid feed high in nitrogen during the spring as the heads begin to form.

Seeds will store for up to 4 years . A family would probably only need 2-3 plants per year.

The fresher the broccoli spears are the better their flavour . Steaming tends to retain more flavour and texture than boiling does but whichever cooking method you use they will turn green once cooked.

Broccoli is considered to be one of the “super foods”. A number of studies suggest that it can help to protect you from bowl cancer, one of the biggest cancer killers in the UK today . Broccoli contains a chemical called sulphoraphane which is thought to help against colon cancer by neutralising cancer-causing substances found in the gut.

In a study published in the British Journal of Cancer (published by the research journal Nature) the researchers show that in laboratory tests, a compound called indole-3-carinol (I3C), found in broccoli, cauliflower and cabbage can increase the levels of BRCA1 and BRCA2 proteins that repair damaged DNA. This is helpful against some forms of cancer including breast, ovarian and prostate cancers.