Growing Radishes – How to Grow Radishes

How to Grow Radishes – A Guide to Growing Radishes 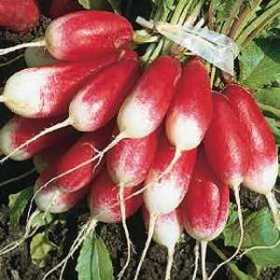 Summer radishes can be ready to harvest in as little as 18 days from sowing (20-30 days is more usual). They are easy to grow, making them ideal for children to sow and see very fast results. Once they can see the magic of gardening they will be hooked for life .

There are many varieties of salad radish available ranging in colours from red through purple and yellow to white.

Japanese or mooli radishes are slower growing larger roots which can grow up to 12 inches (30cm) long. Because they are in the ground for longer than the summer varieties the soil will require preparation as for root crops. Proper crop rotation is advisable to help reduce the risk of club root .

These radishes are sown directly, usually about 1-2cm deep about 4-5 inches (10-13cm) apart with 10 inches (25cm) between rows. Most Asian radishes are sown during May-July as earlier sowings may bolt. They are ready about 8 weeks after sowing and will often stand for a few weeks in the ground before harvesting.

Large winter radishes are usually sown in late summer and should be grown in the same way as parsnips. Leave them in the ground until required. Protecting with straw or fleece in frosty weather to prevent the ground from freezing so that you can harvest them .

Although radishes are from the brassica family and theoretically susceptible to clubroot, the summer varieties develop too quickly to be affected. Two pests that do bother them , though , are slugs and flea beetles. Both of which eat the root at best making them look unappealing on the table. The Asian and winter varieties which are in the ground longer will need to be grown more carefully.

Summer radishes grow so fast they are often thought of as a catch crop and can be excluded from your rotation plan. They are a very easy to grow crop but they do like a light soil with plenty of humus.

Wherever there is a small space you can thinly sow some seeds. Sow them about an inch (3cm) apart and cover with about a half inch (1cm) of soil. Water well and harvest as needed but before they begin to go woody , so harvest young and compost when they start to show signs of age. Sow a few seeds every week or so from Mid-March until Mid-July and under glass in January and February for an early crop. Harvest from May until August.

If the weather is hot they like a little shade and can even be grown in the shadow of other crops. Summer radishes are also often used as a marker crop when sowing such things as parsnips. Sow radish in the same row as the parsnips and they will be ready to harvest by the time the parsnips have germinated.

Winter Radishes are sown directly, usually about 1-2cm deep about 4-5 inches (10-13cm) apart with 10 inches (25cm) between rows. Most Asian radishes are sown during May-July as earlier sowings may bolt. They are ready about 8 weeks after sowing and will often stand for a few weeks in the ground before harvesting.