Growing Celeriac – How to Grow Celeriac

How to Grow Celeriac – A Guide to Growing Celeriac 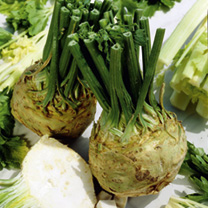 Celeriac, a close relative to celery, is making a comeback with it’s very tasty root that is a wonderful addition to soups, stews, and raw in salads. And unlike celery, celeriac roots can be stored up to six months in proper conditions.

It is not as fussy a crop to grow as some believe it to be but it does not grow well in containers.

Slugs can be a problem in the early stages, but as the plant matures slugs are less of a problem.

Carrot fly can be a problem for celeriac as can celery fly so netting is advised.

Celeriac plantings must also follow plant rotation and generally not grow in the same area two or more years running. If you provide adequate calcium and consistent moisture, most disease problems don’t appear.

Start seeds in March, two per pot, preferably in biodegradeable pots that can be planted out. If both seeds germinate, remove the weaker seedling. Celeriac seeds need light to germinate so cover with no more than 1/8 inch of soil, keep the soil moist, and in a warm area, about 70-75F (20-21C). Once the seeds germinate, lower temperature to about 60-70F (16-20C).

Hardening off the seedlings is recommended by reducing water and gradual exposure to direct sunlight. This should be done in late May thereabouts when temperatures are consistently warmer. If the outdoor temperature goes under 55F for ten days or more, the plants will bolt (go to seed).

Celeriac needs a manure-rich, fertile bed with good drainage in a sunny spot. Plant it out in late May to mid-June, spacing them 6-12 inches (15-30 cm) apart in rows 18 inches (45 cm) apart.

As the celeriac grows, continually remove the top shoots to leave about 3-5 stalks. This encourages bulb growth. Keep weed-free and water regularly

Earth up in September.

Monarch is an excellent, high quality variety which has very smooth, easily washable, creamy coloured roots. Maturing time approximately 30 weeks from sowing. Easier to grow than celery and can be grated raw over salads, cut into slices and boiled, or into strips which are fried.

A Method of Growing Celeriac.

Mr Arthur Roberts shared his method of growing celeriac. After emphasising the importance of growing under netting to ward off the carrot and celery flies he says:

I get good size celeriac every year but the process is quite hard going.

Start by sowing in divided trays (modules) under glass with heat – reduce seedlings to 1 per section.

When ready pot up the plants into 10cm pots and keep under glass.

Repot plants into 2litre pots using a mixture of garden compost and old compost plus a bit of Growmore – keep under glass.

Harden off plants in mid-June and plant out in final position.

Water well and use Growmore .

I usually harvest from the end of October as they seem to put on quite a bit of bulk in October.

I have tried Monarch and Monet varieties and find Monarch give bigger roots.