Growing Asparagus – How to Grow Asparagus

How to Grow Asparagus – A Guide to Growing Asparagus

A  guide to methods of growing your own asparagus with links to further information on asparagus growing, asparagus seed etc. 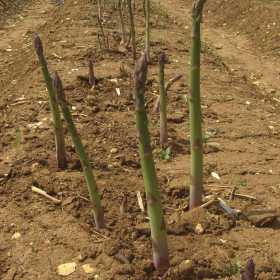 New Asparagus Spears in the Bed

Growing Your Own Asparagus

Asparagus plants are either male or female. The male plants are more productive and all male F1 hybrids are available with their energies going into edible spears rather than berries.

A raised bed is considered the best method of cultivating asparagus. It likes a well-drained, sandy soil, but can be successfully grown on heavier, even clay soils providing they have been cultivated first with plenty of humus and some grit or sand to aid drainage.

Cover the crowns with fine sieved soil to about 5 cm (2 inches) above the top of the crown. Fill to the surface as the plant grows.

Keep weed-free but be careful not to damage the shallow roots as you do so: best to hand-weed. Water as required, but avoid making the trench too wet.

Don’t take a crop in the first year. The spears will turn into foliage to feed the plants. As the foliage turns yellow in autumn, cut it off 5–10 cm (2–4 inches) above ground level.

In spring, draw up a ridge of soil over the centre of the plants, about 10 cm (4 inches) high. Add a general purpose fertilizer such as fish, blood and bone or Growmore. The spears will start to appear in early May. Take just a few and leave the rest to develop. 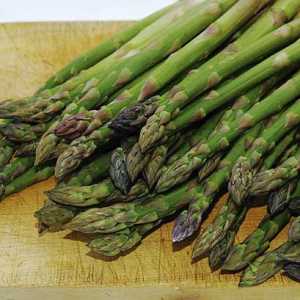 Cut the spears with a sharp knife some 7.5cm below the ground when they are about 10cm high above the ground. You can actually buy a special knife, especially shaped for cutting asparagus.

The real season starts in mid-May and runs through June when you must show restraint and stop cutting.

Protect from late frosts with fleece.

Pests and Problems with Asparagus