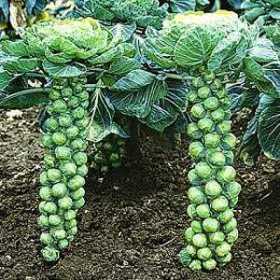 Brussels Sprouts were a popular vegetable in Belgium, hence the name. They are delicious if grown and cooked correctly – see Brussels sprouts recipes and are an excellent source of vitamins C and D and dietary fibre. They also contain glucosinolates – compounds which may help to prevent cancer. Brussels Sprouts are a member of the brassica family so club root may be a problem if you have it on your plot.

They are a slow growing vegetable, and take 26 to 31 weeks to reach maturity. They can be picked fresh from September until February.

For something different on both plot and plate, why not try growing some red Brussels sprouts? They’re certainly different looking and they do taste well.

Start off in March and April and plant out around May and June in their final position. Allow plenty of space for them, most full sized varieties require 75cm between plants . They like a rich soil with plenty of nitrogen to grow their extensive leaf area.

Prepare a bed for them as given in Preparing the Ideal Brassica Bed and as they will be in the ground long time and grow into such large fleshy leaved plants, they really need some extra feed during August or September to produce a good crop . A couple of teaspoonful’s (10ml) of dried blood or one of sulphate of ammonia sprinkled around the base of the plant would be ideal .

As the sprouts begin to form in early autumn, earth the stems up with an inch or two of soil or mulching with rotted garden compost to help to prevent them rocking and provide some feed. Sprouts are tall plants and wind rock breaks the small root hairs that take water and food into the plant causing lower yields. Planting in a sheltered spot is not always possible and staking tall varieties is worthwhile.

A good way to cook sprouts is to clean and remove any loose outer leaves. Drop them into water at a rolling boil for just two or three minute. Remove and drain well, then gently fry in butter with plenty of black pepper for a few minutes. This is a really tasty alternative to the soggy boiled version.

Gluts of sprouts can be frozen. Blanch them for two or three minutes before freezing and reduce the cooking time by a quarter when you use them. Brussels tops can be used as a vegetable after the sprouts have been used but removing it before then will stop the development of the buttons. Some say it is the most delicious of the green leafy brassicas.