Growing Celery – How to Grow Celery

How to Grow Celery – A Guide to Growing Celery 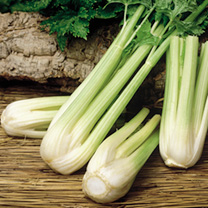 Celery is a mainstay flavouring vegetable as well as popular snack vegetable. With regular watering and weeding, celery is fairly easy to grow. The modern self-blanching varieties being a lot less trouble than older cultivars.

Come autumn, if you still have extra plants, you can dig them up and store them indoors for a few more months of use.

Good varieties to try are Tango F1 and Loretta. Galaxy is an early variety which can be grown in polytunnels for a really early crop. These are self-blanching and do not require tying or wrapping up.

Lathom Self Blanching : Galaxy – A heavy yielding variety with long stringless sticks of crisp tasty celery. As it is reasonably free from bolting it can be sown earlier than other varieties and is also useful for growing in plastic tunnels as well as outdoors.

Slugs can be the primary problem in the celery plot not only with leaf munching but they can introduce a bacterial disease called celery heart rot, which needs little explanation.

Celery, a bog plant, is very sensitive to any heat and moisture stress so it’s important to keep plants regularly and well watered in hot spells. Show growers have been known to provide 30 gallons per plant per week!! If plants are in full sun, then some added shade is very beneficial.

Celery fly, parsley worms, carrot rust fly and nematodes can also be a problem. Avoid planting next to parsnips, carrots and celeriac which can be affected by the same pest.

Sow indoors in heat, under glass in late March–early April in a compost and sand mix. Water regularly. Seedlings are temperature sensitive so avoid wide temperature fluctuations to maintain steady growth and ensure there is good air circulation to avoid humidity problems.

Harden them off carefully for planting into their final positions in late May–early June.

Celery is a greedy, thirsty crop that needs hummus-rich soil mixed with plenty of manure or Growmore, and bonemeal. And plenty of water at all times.

Plant in a block, with 20 cm (8 inches) between plants in a partly shaded area. If high heat becomes a problem, add some overhead shade cloth so plants do not bolt, and keep well watered. Feed every 14 days with compost tea.

For varieties that are not self-blanching, you may need to insert straw between the plants and wrap the outer plants with brown paper, or cardboard tied around the plant.

Alternatively, space a little wider apart and wrap the lower leaves of each plant with cardboard or brown paper tied with string. If they grow above the wrapping, add another cylinder around the plant higher up. Always keep the top leaves exposed.

Newer varieties like Tango are self-blanching and are finer flavoured and less stringy than the older varieties, but they’re not hardy and will be finished by the arrival of winter frosts. If you still have thriving plants, they can be dug up prior to frost with most of the root, planted in a deep box filled with damp sand or compost, and stored in a cool place for a few more months.

Celery also dehydrates very well for use in soups and stews.