Growing Chicory – How to Grow Chicory

How to Grow Chicory – A Guide to Growing Chicory 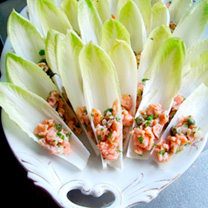 Chicory is frequently used in an autumn or winter salad. It is an acquired taste; some people find it refreshingly tart, others find it too bitter.

There are two main types: forcing (more popular and are said to taste better), and non-forcing (do not require blanching and are therefore easier to grow).

Pests and Problems of Chicory

When ready to produce the new young shoots to eat (these are called chicons), place up to 5 roots in a pot of 25cm diameter filled with damp multi-purpose compost, leaving the crowns just visible above the soil. Cover to exclude light (e.g. another pot with drainage holes covered) and grow on in warmth at a temperature of at least 10-13°C. A chicon should grow from each root within a few weeks.