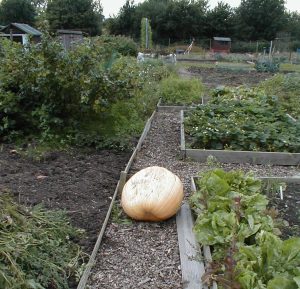 One of the large pumpkins – too heavy for me to lift on my own.

I often get emails asking me for my “Giant Pumpkin Growing Tips” and “How to Grow Giant Pumpkins”. Well I won’t pretend to be an expert, I’ve never entered a giant pumpkin growing contest, but I have grown a couple of very large pumpkins in the past.

The world record for a giant pumpkin is currently held, I believe, held by Belgium Mattias Willemijns. His 2016 monster weighed 2,624.6 pounds (1,190.50 Kg) and was exhibited at the Giant Pumpkin European Championship in Ludwigsburg, Germany. Awesome!

My more modest plan was to just give a big pumpkin to my nieces for Halloween but they grew even better than I expected.

Like any vegetable, different varieties have been selected for different purposes. With pumpkins, the giant types have purely been selected for size, not flavour. So whilst these make great Halloween pumpkins they don’t always make a good pie. In part, this is due to the forcing in the cultivation

In the UK we have a few varieties of seed suitable for giant pumpkin growing, all available from the allotment shop: pumpkin seeds.

The Atlantic Giant Pumpkin is the variety I grew. It’s regularly produced monsters weighing over 600lbs. They claim it’s delicious, but I was just aiming for size

Although this is a competition variety, it’s reported to have a good flavour. Perhaps a little outmoded now by the Atlantic Giant but good results can be had with it anyway.

Another good prospect for the giant pumpkin competition. Often produces fruits over 50 kg!

How to Grow Giant Pumpkins

Having obtained your seeds, you want to start them off quite early in April. Sow individually just under the surface into 3″ pots of multi-purpose compost and germinate indoors at 20 to 24 degrees. Pop the seed sideways into the compost to stop water sitting on it and causing rot. In a week or so, two weeks at most, the seed should have germinated.

Keep them warm in a greenhouse or coldframe. If you have late frosts then bring them into the house if need be to avoid checking the growth. Once the plant has started, growth will be fast. Move into larger pots if the roots start coming through the bottom of the plot.

Start hardening off by opening the frame in the day and when the risk of frosts is passed it is time to plant out, preferably under a cloche until the plant gets too large.

Dig a hole about 2 feet square and deep, fill with good compost or mix well rotted manure into the soil. Add a few handfuls of general purpose fertiliser like fish, blood and bone or Growmore into the mix as well. The soil should end up slightly mounded.

Carefully plant out, teasing the roots if they’re circling in the pot.

OK, there’s lots of secret recipes and suggestions. I think most of them are made up to put people of the scent rather than anything else. Use a liquid feed like Miracle Grow fortnightly or liquid comfrey feed with some added sulphate of ammonia to increase the nitrogen content.

Allow plenty of space, for giants you need at least 8 feet between plants. The foliage feeds the fruit so you’re going to have a lot of it. Keep weed free and well watered in wet weather.

Once you have 3 fruits starting to form, remove any flowers that develop. We need to concentrate everything into one pumpkin. Once the three small pumpkins have started pick the best one and pinch off the other two.

If you’ve an old palette on site, put that under the small pumpkin whilst you still can or even some straw. You can use plastic sheet but it can encourage rotting if water puddles under the fruit. It’s really annoying to have a wonderful pumpkin and find the part on the ground has rotted. Some slug defence is a good idea as well.

Come the autumn, get a friend to help you lift your fruit!

Gerald Short kindly sent me this piece on growing really giant pumpkins. In 2019 he grew a 1495lb pumpkin which came 2nd in the UK and he tells me that in 2020 he grew the UK record for largest pumpkin on an allotment, if such a record exists, 1558lbs!

You can follow Gerald’s growing here as he takes us through a year from seed to show. 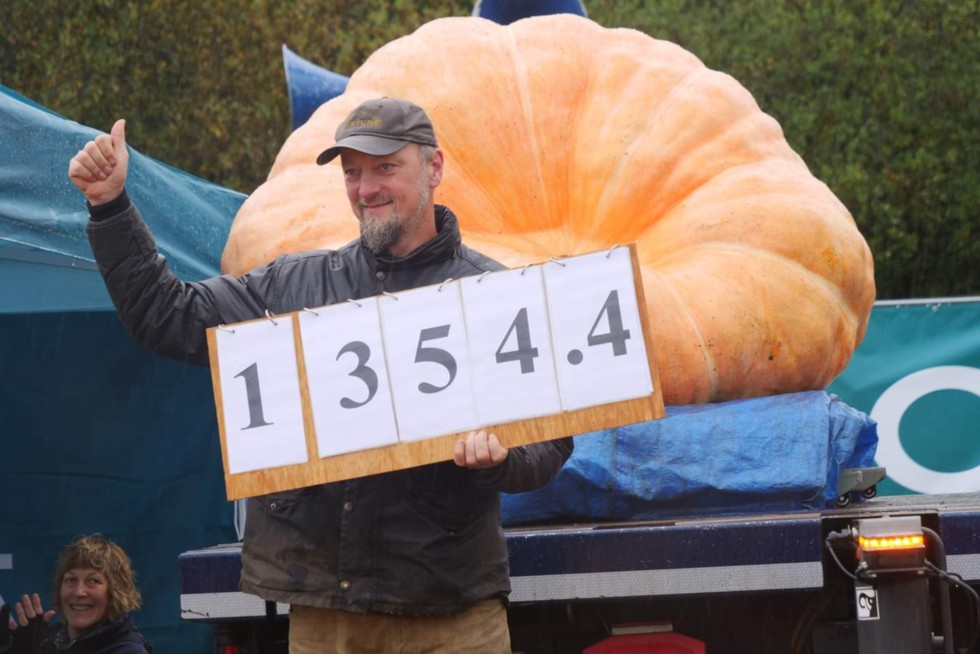 To grow a truly giant pumpkin it’s very important to start off with the right seed. Good genetics is vital if you’re trying to end up with a potential prize winner. The seed to have is from an Atlantic Giant, and the best seeds can be bought on the internet or acquired direct from a past grower.

In April, take a seed and gently file it along the edges so that it will be easier for it to break through when it germinates. You can start them off by placing between some damp (not wet) paper towel, or sow direct in a 5 litre pot filled with seed compost with the pointed end down. They won’t germinate well at room temperature, so place them in a warmer environment at 25-28C. Germination will take 1-4 days, at which point the temperature needs to go down to 18-20C. Then the young plant can grow on in the pot which needs to be placed somewhere sunny. After 7-10 days it will need to be transplanted to a ‘pumpkin patch’ outdoors or in a large polytunnel.

Pumpkin plants are fast growers and heavy feeders. They will need 300-600 sq feet, ideally with some kind of fence or barrier to provide protection from the wind. A loamy soil is best, and it’s always a good idea to dig in plenty of well-rotted cow manure during the previous autumn. The ideal pH is between 6.5 and 7.2.

When transplanting, you need to bear in mind that a huge plant will grow outwards with a long main vine and with many secondary vines coming off it. The first 2 leaves on the plant are the cotyledons, the next one is the first “true” leaf. The main vine will run in the opposite direction from the first true leaf, so when transplanting make sure it’s facing the right way for it to grow in the desired direction. Like all curcurbits, they are not frost hardy so protection from cold nights and frost up until the end of May is vital. A mini cloche built from a wooden frame and clear plastic sheeting will do the job.

As June progresses, a high nitrogen feed is a good idea to promote leafy growth. The main vine will grow outwards towards the centre of the patch. If it grows wayward, train it by placing bamboo sticks either side. As it grows longer, secondary vines will appear at the nodes where the leaves appear.

Using bamboo canes again, train each of the secondary vines to grow away at 90 degrees from the main vine. As the secondary vines grow, they in turn will produce tertiary fines at the leaf nodes – these should be pinched off. If you don’t pinch them off, the plant will rapidly turn into a tangled mass of leaves, which will encourage disease and rot. You’ll also find rogue pumpkins lurking in there too, taking energy from the main one! So it’s important to keep up with this work, because at this stage of growth the plant is growing rapidly, with vines increasing in length from 4 – 8 inches per day!

Also at each node will appear a male flower, a tendril, and a tap root. The tap roots can appear from above and below the node, so bury each node under some soil, so that they both have a good chance of rooting. The more roots the plant has, the more water and nutrients it can take up, and the bigger the pumpkin! They will also help to stabilise the plant during windy days.

The main and secondaries should grow out in the shape of a Christmas tree; terminate the first secondaries when they are 15 to 20′ long and then as you go up the main make them progressively shorter.

You’ll notice that there are two different types of flowers on your pumpkin plant. At each node there is a male flower, but sometimes you will notice it’s a little different – it’ll have a ‘baby pumpkin’ about the size of a golf ball at its base. This is a female flower, and when pollinated they’ll go on to form pumpkins.

However, you need to pinch off ALL the female flowers, apart from one on the main vine when it appears at a minimum of 10 feet out. The female flowers usually open at sunrise just over a week after they first appear. When they do open, pollinate it as early as possible in the morning with one or more of the male flowers, either from the same plant or another Atlantic Giant. Make sure plenty of pollen is rubbed over the stamen. Then tie up the flower petals with some string to prevent water getting in, contamination, dehydration etc.

If the pollination has succeeded (and sometimes they don’t), you’ll see the fruit swell day by day. When it’s about the size of an orange it will need piece of plywood covered in sand to lie on. This might need to be adjusted on a daily basis as the fruit grows. Try and manoeuvre the vine so the fruit is on the outside of a curve. You can remove secondary vines if necessary – think 2 months ahead when there is potentially a huge pumpkin there – it will need the space, and you don’t want it growing on top of the vines. While it’s still big enough to lift, carefully place it so it will grow on a large piece of plywood covered with an inch of sand.

It’s possible that the first one will abort, or the pollination didn’t take, so it’s a good idea to pollinate a few ‘spare’ pumpkins further up the vine. These can be removed when you’re sure the first one has taken, which is usually when it gets to about 40 inches in circumference.

As it grows, the pumpkin will need some protection from the wind and sun so that the skin does not dry out and remains supple enough for growth. Cover it with a white sheet, or erect a mini tent or umbrella shade over it.

Continue to pinch out rogue tertiary vines and bury nodes as the summer progresses. Keep the whole plant, including the buried nodes, well watered especially during hot and dry periods. Foliar feed is always a bonus. High potassium feed is good for fruiting. Be prepared for blackfly in July, and powdery mildew in August. The pumpkin itself should stop growing and be ready for harvest around the end of September.