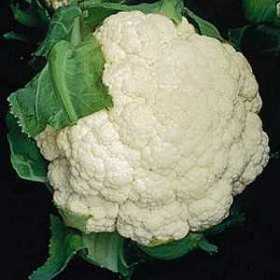 Cauliflowers are not the easiest of brassicas to grow but I think they are probably the most satisfying. A beautifully formed cauliflower with tight curds is wonderful to see and producing it is a very satisfying. As well as white varieties you can get yellow and purple ones.

There are three types of cauliflower; summer, autumn and winter varieties. Summer varieties can be sown in the cold frame in September, indoors in January or outdoors in April and some varieties may be harvested in June or July while other outdoor sown varieties will be ready during August.

Autumn varieties maturing during October and November are of two types some vigorous and large and some more compact. Winter cauliflowers are really ‘heading broccoli’. They are less delicately flavoured than true cauliflowers but are easier to grow. They may take 40 to 50 weeks to mature from March through to June.

By selecting different variety and planting at the right time, it is possible to have a cauliflower to cut most of the year but mostly from March to November. The old Victorian Head Gardener would be able to provide a fresh cauliflower on demand evry day of the year.

Cauliflowers are very vulnerable to club root so follow the instructions on growing with clubroot infected soil some, however, are now being bred with clubroot resistant. They are susceptible to cabbage root fly as well. Caterpillars and slugs and pigeons are the worst pests of cauliflowers. Caterpillars will eat the leaves and get into the curd and slugs to climb the stem to eat away the surface of the curds leaving brown trails. Pigeons will eat the leaves of young plants.

Cauliflowers should be grown in firm soil and react badly to poor cultivation techniques. Follow our instructions for the ideal brassica bed and you’re likely to be successful. Cauliflowers are very hungry plants and need plenty of nitrogen to grow well. They are best eaten fresh so you should sow them successionally to prevent a glut you can’t use.

Sow successionally into modules, thinning them at seedling stage to one plant per module. Move them up to a larger pot when ready, this will prevent root disturbance – but don’t allow them to become pot bound.

You can check the root system by turning the pot upside down holding the plant between your fingers to stop the soil from falling out then lift off the pot. If the white roots go around the pot in circle it is pot bound. Move it into a larger pot teasing out the roots to encourage them to grow into the new compost.

When re-potting or planting out they should be planted deeply, up to the base of the seed leaves. This helps them have a firm stalk above ground and grow into strong plants.

When you plant Cauliflowers out into their final growing position, ensure they are well firmed in and watered so that the roots establish well. If a good root system is not established early on they will never be able to absorb the water and nutrients they require – cauliflower heads will be small. Don’t allow too much sunlight to get onto the head as it will cause the curds to be slightly yellow rather than white, this can be prevented by bending some of the inner leaves over to shade it the head.

If you don’t harvest the cauliflower as soon as it is ready it will continue to grow and the florets will begin to open spoiling its eating quality. Some varieties stand longer than others, so check the description in the seed catalogue.

Cauliflowers can be stored in the fridge for 1-2 weeks wrapped tightly in cling film. A glut can be frozen although they do tend to go a little soft and discoloured.