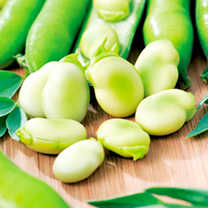 There are three main types of broad (fava) beans:

Pests and Problems with Broad Beans

Tall broad bean plants can be blown over in windy conditions , so support should be provided. The easiest way is to us stakes or strong canes and horizontal strings on each side of the row of bean plants.

The main pest on broad beans is blackfly on the young growing tips in summer. Remove the top portion where the blackflies gather.  Or you can wash them off with soapy water or a hosepipe

Rust can be a problem on broad beans later in the growing season.  It is a fungal disease spread by the rain and makes the plants look as if they are going rusty. It grows rapidly in warm wet conditions causing leaf drop and possibly reduce the size of the pods .

Chocolate spot is another fungal disease. It causes dark, chocolate-coloured spots on all parts of the plant. It can cause the plant to collapse and is worse in overcrowded , cool, moist, conditions. A lack of potash may weaken plants so add extra potash to the soil.

Sow winter varieties in late October–November for an early crop in June, In a bad wet winter plant losses can be high so consider your local climate. Sowings under cloches from late February through to early May can give a crop from June–October, but the later you sow them the more prone they are to blackfly and fungal diseases.

For best results, sow into 8 cm (3 inch) pots under glass or in a cool greenhouse. These can be planted out about three weeks later. Or sow directly into their growing position. If you do it is a good idea to sowing a few seeds into pots to fill any gaps where they have not germinated . The usual spacing is 20 cm (8 inches) apart in double rows 20 cm (8 inches) apart, staggering the plants. This helps them to support each and some sticks and string will ensure they are not blown over. Space these staggered rows 60–75 cm (24–30 inches) apart.

If you are growing a few in containers, use larger pots, planting 15 cm (6 inches) apart, with at least six plants per pot to support each other.

Blanch older beans and remove the tough outer skin before eating or freezing.