Growing Scorzonera – How to Grow Scorconera

How to Grow Scorzonera – A Guide to Growing Scorzonera 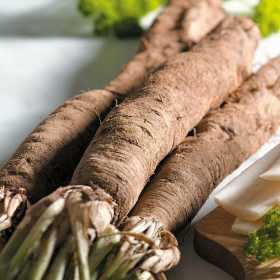 Scorzonera is a root crop which was well known and popular in the Victorian garden. It is very rarely seen in the shops because it’s not commonly known nowadays and so not popular. Yet the flavour of Scorzonera is considered superior to that of parsnips which it resembles somewhat. Scorzonera has a darker skin, is smaller than a parsnip and less tapered.

Scorzonera is very easy to grow so long as the soil has been properly prepared and is available to a good depth. It is of the same family, the Compositae, as Salsify and Jerusalem Artichokes. It should be cultivated in the same way as Salsify

You can intersperse a row of scorzonera with carrots as it is said to repel the carrot fly.

Scorzonera requires a good depth of light soil and is well suited to growing in deep raised beds and large containers. Like other root crops do not manure the year before which will cause the plants to fork. They do benefit from the addition of a general purpose fertiliser the week before sowing.

On clay soils, add sharp sand to the soil and compost to improve the tilth.

For raised beds, sow 3 seeds per position direct in late April, early May at 23cm (9″) each way spacing, 1.5 cm deep thinning out to one plant per station otherwise, for standard row growing space at 23cm (9″) apart in rows 38cm (15″) apart.

Sow from early April to late May depending on your location, hopefully avoiding frosts but fleece if frost threatens germinated seed

The crop should be ready to harvest by October or November but can be left in the ground through to February. Otherwise store as parsnips and carrots in damp sand or peat.

They are trouble free, just water in dry weather.

Preparation is more difficult than the humble parsnip, scalding will make the skin easier to scrape off and then steam or boil until tender. Boiling and then peeling is recommended by some chefs. The difficulties in preparation are repaid with the taste.

You can use Scorzonera in recipes for parsnips but the subtle flavour is best served by just steaming and then serving with melted butter or even Hollandaise sauce.