This is the basic standard crop rotation favoured by many gardeners because of its simplicity. After taking out the permanent beds, the growing space is divided into three and handled as below. 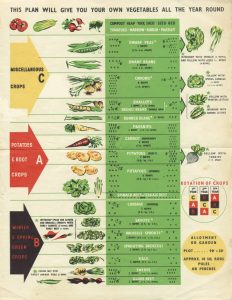 It was heavily promoted in the WW2 ‘Dig for Victory’ campaign as part of the standard cropping plan which was designed to provide a family’s vegetable needs from a standard allotment plot.

This crop rotation is far from perfect but it is simple to understand, easy to follow and you could do a lot worse than follow it!

The problem with this crop rotation system is that it assumes you will be growing a lot of roots, potatoes and brassicas. The third of the plot left over has to cope with everything from onions and garlic to sweetcorn and squashes.

I would put the peas and beans (leguminosae) in with the brassicas if space allows.

Neither does this crop rotation allow much time before the potatoes are back in the same bed and the lime left over from the brassicas is still keeping the pH level a little high for them.

Having said that, it is very easy to manage and any spaces on the plot if you grow too few brassicas for example can be filled with crops from the ‘everything else’ group.

The most important thing to remember with crop rotation is to avoid growing the same crop in the same place for two years running.

We’ll start our rotation year in the preceding winter – just to add to the confusion. Don’t worry, all will become clear.

On heavy clay soils you will probably be digging over each winter to allow the frost’s freezing and thawing action to break up the soil. With light soils it would be a good idea to sow an over-wintering green manure crop to hold nutrients that would be washed away in the rain.

The green manure can be dug into the soil in the spring to release those nutrients and improve the soil’s humus level with the organic matter. On really light soils a green manure is vital to build good condition and adding the well-rotted manure or the lime in early spring after digging in the green manure is suggested.

The early potatoes that come out of the ground in June and July can be followed with French beans who are not too fussy about the acidity level of the soil and will produce a crop on the same ground.

If you have enough land that you are not pushing for maximum crops and you don’t have clubroot to worry about, follow your potatoes with a green manure of mustard. The use of mustard as a green manure after the early potatoes hardens the cysts that contains the next generation of potato eelworm so preventing them from hatching.

Run strawberries at the edge of the plots, looking to renew from runners every four years

From other families in the roots group:

NB: Turnips are actually a brassica but are not in the ground for long so unless clubroot is a massive problem can be safely grown out of the brassica group

A lot will depend on your actual requirements when you set up and use a rotation plan. The important part of your crop rotation is to keep things apart for as long as possible.