Growing Rhubarb – How to Grow Rhubarb

How to Grow Rhubarb – A Guide to Growing Rhubarb 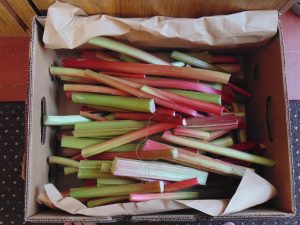 Rhubarb is one of the easiest, almost indestructable perennial plants to grow, but is also a fairly large plant with a deep root system so is not suitable for close spacing or containers. However, it can be grown in open based containers.

Rhubarb leaves contain oxalic acid, which is poisonous, but are safe to compost. Only the stems are eaten. Avoid feeding the leaves to livestock.

Rhubarb can be grown from seed but it takes several years to bear adequately and does not always produce true to type. The easiest and preferred method is to grow rhubarb from root cuttings called crowns.

Different varieties mature at different times of the year, and it is possible to have rhubarb cropping from April to August. Varieties can also offer degrees of stalk redness and sweetness.

For early cropping and forcing, try Timperley Early. Victoria is a late variety. Glaskin’s Perpetual is popular and tolerates some stalk harvesting in the first year.

Generally a trouble free crop, rhubarb can suffer from crown rot and honey fungus. If this happens, dig up and burn the affected plants and roots. New crowns or plants must be planted well away from the old planting area.