How to Grow Onions from Sets – Allium Cepa

Onion sets are small, immature onions whose development has been stopped. The onions are carefully stored in climate controlled conditions until spring when they appear in the shops. For the beginner they have the benefit of being less fuss than growing from seed. 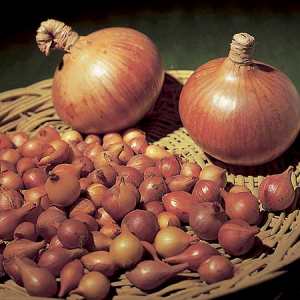 Because they’re already on their way and have more stored energy than seeds, sets get growing faster, are more disease resistant than seed and are easier to handle. If you’re late sowing then sets can save the day and can go in as late as the end of April.

However, there is far less choice of variety than with seeds, they are more expensive, don’t keep as well as seed grown and are more prone to bolting.

The latter is down to them being basically second year plants. Onions are biennials and their natural course is to grow from a seed to a plant and then into a dormant bulb in the first year. In the second year the energy from the bulb is used to form a large stalk and flowerhead which goes on to form seeds, starting the cycle again.

Note: Large sets are more prone to bolting so do not discard small sets in the pack in favour of large as many do.

Bolting is when the onion stops putting energy into a bulb and instead grows a the stalk and flowerhead. It doesn’t take too much to trigger this behaviour in sets, a period of low temperature early followed by warm temperatures later or even the gardener squinting at them seems to be enough for the onion to bolt. Loose soil or miss-aimed hoeing causing root disturbance convinces the onion it is dying and needs to propagate so resulting in bolting

What are Heat Treated Onion Sets

Because of the problem of sets bolting, the merchants developed a method of treating the sets that kills off the flower embryo and prevents bolting. The onion sets are held at a high temperature (between 26 and 32 deg C) for a period between 30 and 60 days depending on the variety.

Note: Heat treatment of onion sets is purely to prevent bolting, it’s nothing to do with preventing disease

Onions are fairly tolerant and will grow acceptably in a soil with a pH ranging from 5.5 to 7.5 but prefer a pH (acidity level of the soil) near neutral. The onion doesn’t require a great depth of soil but a fine tilth is essential. They also like a fairly firm soil so treading down freshly cultivated soil is beneficial.

If the pH is just a little low, rather than add lime (preferably dolomite lime with it’s magnesium) consider adding calcified seaweed at between 100 gr and 150 gr per square metre which will raise the pH (reduce acidity) and add micro nutrients at the same time.

An old idea was the adding of a couple of ounces of salt per square yard to the onion bed prior to planting. I used to be dismissive of this idea until I tried it and had a really excellent crop. I just used road salt that I had in store after winter.

They like a high level of potash, which is found in wood ash along with moderate levels of nitrogen and phosphate. A small amount of extra Magnesium can be useful.

This can be achieved by adding a balanced chemical fertiliser, especially for onions like Chempak onion fertiliser or by a general organic fertiliser like fish, blood & bone with added wood ash.

The strong flavour of onions is caused by the sulphur content. High potash levels reduce the sulphur uptake so if you use low potash fertilizer you will get smaller but tastier onions eventually. I generally prefer a good flavour to large size with onions.

I use fish, blood and bone with a small amount of pelleted chicken manure to add a little extra nitrogen. The organic fertilizers release more slowly and evenly than chemical fertilizers except formulated slow-release fertilisers.

Just as with seed grown onions, the eventual size of the onions will depend on the spacing to a large degree. Usually I grow from sets when I’m running late for seed growing and don’t have time for large onions anyway. Accordingly I see little point in spacing greater than 15cm apart each way or 10cm in 20cm rows.

The set grown onions like a firm soil but just pushing the set into firm earth can damage the root plate, effectively killing the set. Take the corner of a hand hoe or trowel and scrape a little hole as deep as the set. Place the set in the hole and push the loose soil around, just leaving the tip of the set visible.

Plant the set with the thick end down, if you look closely you may see the start of the roots on the flattish plate at the base.

Apart from the normal problems that afflict the onions and bolting, the biggest problem with onion sets are birds who like to pull them out of the soil. Netting, fleece or even cloching until established is advisable.

Onions are shallow rooted and can be easily swamped by weeds so it’s important to keep on top of the weeding. Hoeing between the plants frequently to make sure weeds don’t get established is critical to success. You may find it easier to use a hand hoe rather than a long handled hoe since it’s easy to slip and hoe up or damage the crop.

Keep watered in dry weather but once the foliage starts to fold over towards the end of the season, usually August or September, cease watering unless it’s blistering drought.