How to Grow Onions from Seed – Allium Cepa

Benefits to Growing Onions from Seed 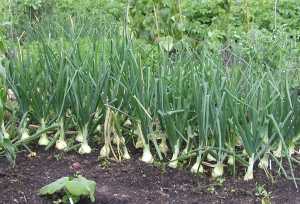 Sets have a head start on seeds, they’re partially grown already, so if you’re late sowing seeds, after mid-April, you’re probably going to be best off planting sets.

The onion is one of those plants whose growth is guided by day length. Once the summer solstice is past and the days become shorter, the onion starts to put all its energy into bulbing up. If the plants haven’t become well established by the solstice you’ll never get a decent sized bulb.

In days past the old gardening books laid great importance on the onion bed and would grow in the same place year to year. They would often formulate recipes for the soil including the addition of soot to the soil. Suggesting adding soot to darken the soil so it absorbs more sunlight and warms up faster, will probably end me up in deep trouble nowadays as soot was known to be cancer causing since the 1700s (Look up ‘chimney sweeps disease’ for more info)

Another favourite was the adding of a couple of ounces of salt per square yard. I used to be dismissive of this idea until I tried it and had a really excellent crop. I just used road salt that I had in store after winter.

Regardless, the onions should be rotated around the plot to avoid the build up of disease and pest problems. They like a high level of potash, which is found in wood ash along with moderate levels of nitrogen and phosphate. A small amount of extra Magnesium can be useful.

This can be achieved by adding a balanced chemical fertiliser, especially for onions like Chempak onion fertiliser or by a general organic fertiliser like fish, blood & bone with added wood ash.

The strong flavour of onions is caused by the sulphur content. High potash levels reduce the sulphur uptake so if you use low potash fertilizer you will get smaller but tastier onions eventually. I generally prefer a good flavour to large size with onions.

I use fish, blood and bone with a small amount of pelleted chicken manure to add a little extra nitrogen. The organic fertilizers release more slowly and evenly than chemical fertilizers except formulated slow-release fertilisers.

Onions are fairly tolerant and will grow acceptably in a soil with a pH ranging from 5.5 to 7.5 but prefer a pH (acidity level of the soil) near neutral. The onion doesn’t require a great depth of soil but a fine tilth is essential. They also like a fairly firm soil so treading down freshly cultivated soil is beneficial.

If the pH is just a little low, rather than add lime (preferably dolomite lime with it’s magnesium) consider adding calcified seaweed at between 100 gr and 150 gr per square metre which will raise the pH (reduce acidity) and add micro nutrients at the same time.

When to Sow Onions

Onions like a good long period between sowing and the summer solstice so ideally sow as early as possible in March. If you can provide the right conditions, February is even better. After mid-April you are better growing from sets than seed.

The onion prefers a temperature of around 10 to 15 deg C which can be difficult to achieve outdoors early in the year. Cloching for a couple of weeks prior to sowing until the onions are established can make all the difference but do not allow the temperature to rise above 15 deg C as the onions will get confused about what time of year it is and bolt later.

Sow thinly in rows about 20cm apart covering with 1cm of soil. After germination allow the seedlings to get to about 10cm tall and then thin to the required spacing. Be aware the disturbance of thinning releases the scent of the onions on which the onion fly is guided to its target.

For large onions space around 15cm apart but for smaller onions reduce the spacing. 5cm spacing will produce bulbs more of a size for pickling.

This is the system I use for growing from seed. You’re not bothered by the weather, slugs and snails, avoid disturbance and reduce seed wastage. Start sowing in mid-February to early March.

Fill 15 cell to the seed tray modules with multi-purpose compost and press firmly, leaving a headroom of around 1.5cm. Place two or three seeds in and cover with compost, firming down to 1cm depth.

Keep the trays moist in a greenhouse or a coldframe, look for a temperature between 10 and 15 deg C. Following germination, reduce to one seedling per module. Once the seedlings reach about 10cm high they should be hardened off if necessary in a cold frame and then planted out at the final required spacing.

Onions are shallow rooted and can be easily swamped by weeds so it’s important to keep on top of them. Hoeing between the plants frequently to make sure weeds don’t get established is critical to success. You may find it easier to use a hand hoe rather than a long handled hoe since it’s easy to slip and hoe up or damage the crop.

Keep watered in dry weather but once the foliage starts to fold over towards the end of the season, usually August or September, cease watering unless it’s blistering drought.