Between the area where we’ve got our greenhouse and fabulous new potting shed and the new vegetable plot we’d got a sloping piece of land that wasn’t much use for anything but grass.

Even strimming the grass is difficult because the slope was so steep that keeping my footing was difficult. Not only useless but a bit of an eyesore. On the other hand, it’s quite sheltered and gets a fair bit of sun so a real waste of potentially good land. 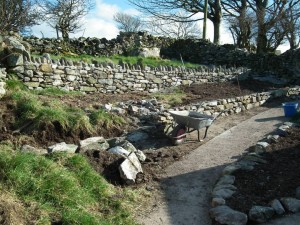 Terracing the Garden in Progress

The obvious answer was to terrace it but that was a task I felt was beyond me. I built one small dwarf wall in brick once. It was a disaster. Up and down, side to side and leaning as well. So much for my skills. At least it gave a proper builder a good laugh as he demolished it.

Happily I came across a local builder who was experienced in stonework and did landscaping. We discussed various options and I followed his suggestion to put up two walls and a sloping path for easy access.

The top wall, being taller and more subject to pressure, especially water pressure, has pipes through it at the base to allow water to escape easily. We made one small change during the job, again at his suggestion, and put coping stones on the top of the wall.

The lower second wall being less tall was left with a flat top. He moved some cubic yards of soil from the area by the path up to the first terrace which was a job that would have taken me a good day in a matter of a couple of hours. 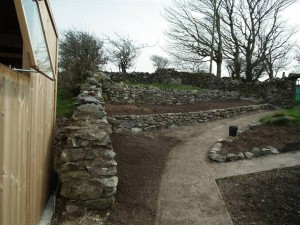 The end result is that we’ve now gained a lot of usable land and it looks better already. The top terrace is roughly 65 square yards and the plan is to use it to keep some chickens on. More than enough room for half a dozen chooks.

The second terrace is smaller, about 30 square yards and the plan is to use it for more fruit. I’m thinking raspberries, tayberries, loganberries and possibly blueberries. The blueberries need a moist ericaceous soil so some more thought on those is still required.

Because it is so sheltered, I think it might be just the place for a couple of cherry trees. I fancy growing Ian Sturrock’s specially bred for wet Wales variety Cariad Cherry

I’ll sketch some ideas on paper and then check by sticking bamboo canes in the ground before I commit myself.

Between the lower wall and the path there’s a border which, after negotiations, will be decorative. I suggested decorative dwarf beans and sprouts but Val’s got her own plans!

And now a well deserved plug. If you’re looking for a builder in Gwynedd area I totally recommend Bryan Peters. He’s old school – takes real pride in his work. There’s not many like him left.

Finally, we’re flying out to the Limousin on Monday for a 10 day break with our good friend Annie so this will be the last entry until our return. I can’t believe it has been nearly 8 years since we last went! You can read about that here: Gardening in the Limousin and see lots of photos here