Friday was potting shed day. I must admit to being a little bit like a kid on Christmas Eve, waking up and checking the clock to see if it is time to get up yet. The shed was due to be delivered at 8am but they actually arrived ten minutes early. 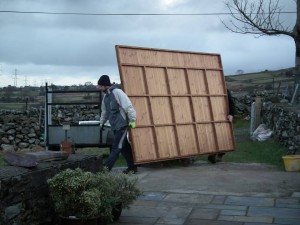 Two scarily efficient chaps had the shed off the wagon and assembled in an hour and a half. They really had things down to a fine art and building it went like clockwork. I thought they’d take a couple of hours at least but by 9.15 they were waving farewell and headed off.

When you buy something online, it’s always a bit of a worry. Will it live up to the blurb or is it going to be ‘Oh, I didn’t expect that’ when it’s unwrapped. With something like a potting shed you can’t really send it back.

The good news is that it was better than expected. Now the Swallow greenhouses and sheds are not cheap, they’re top-end prices so you expect a Rolls-Royce product. They don’t disappoint.

Most ‘solar sheds’ or ‘potting sheds’ just have a glazed wall at an angle connecting to the solid roof. The Swallow shed has vertical glass connected to the angled glass roof. This maximises growing space, allowing as much vertical space as a dwarf-wall greenhouse. Glass to the side, a part glazed door and a window to the side ensures plenty of light to bring on plants.

Ventilation is provided by two opening lights in the roof controlled by heavy-duty automatic vent openers (Bayliss XL autovents) and a manually opening side window. Overheating on a sunny day in a greenhouse is more dangerous to plants than cold weather and plenty of ventilation is a must-have option.

It’s the little touches that really make it, above the roof vents there’s a plate from the ridge pole that keeps water from them and above the side opening window there’s a bar to stop water going in if it’s open. Over the corner edges there are plates to better seal and they look well.

The size is deceptive. Mine was listed as 8×10 but the actual size is 8’9” by 10’5”. The extra width makes a huge difference. There’s plenty of head-room as well, the angled glazing base is nearly six feet from the floor, nearly seven feet at the rear and 7’9” to the eaves in the middle.

The finials on the roof ridge just add to the attractiveness and their swallow logo is on them and some of the windows – nice to see a manufacturer who is actually proud of their product.

The wood is Scandinavian ThermoWood® This is wood that has been heat-treated to 215°C to remove moisture and resins. It makes the wood unlikely to warp and less susceptible to insects and rot. It stands up to cold and wet environments far better than ordinary wood.

The wood will take and hold a paint finish better than ordinary wood, because it shrinks and swells less. Swallow tell me the natural finish will grey somewhat over time and it will benefit from the application of a preservative like Cuprinol annually but regardless it’s guaranteed for ten years.

The nails used in the construction are stainless steel so they won’t corrode over time. The roof isn’t covered with the usual shed-gauge felt. Instead they use a sheet of a UV-stabilised vinyl material similar to that used in curtain siding for lorries. It’s about 3 times as expensive as ordinary felt but they think it’s lifespan should be in excess of 20 years.

Underneath they’ve 20mm black PVC section screwed to the floor battens to stop damp rising into the floor of the shed – a problem we have with our other wooden shed.

The glazing is toughened glass which is a must for us with the winds we get here and safer for the helpful grandson.

We’re really pleased with it. OK, it’s expensive as sheds go but it’s certainly a one-off purchase that will outlast us and do the job better year after year. My first job was to fix it solidly to the concrete base with bolts so it won’t shift when we get a storm with 100 mph gusts. Next task is to run power to it for the propagators.

I got mine through Greenhouse Stores – you can see the whole Swallow range here: Swallow Greenhouses and Potting Sheds. If you’re not sure about anything, they’re happy to help on the phone. My concern was our extreme weather but they reassured me that they had many installations in the Shetlands without problems. If they can stand Shetlands weather, we’ll be OK. 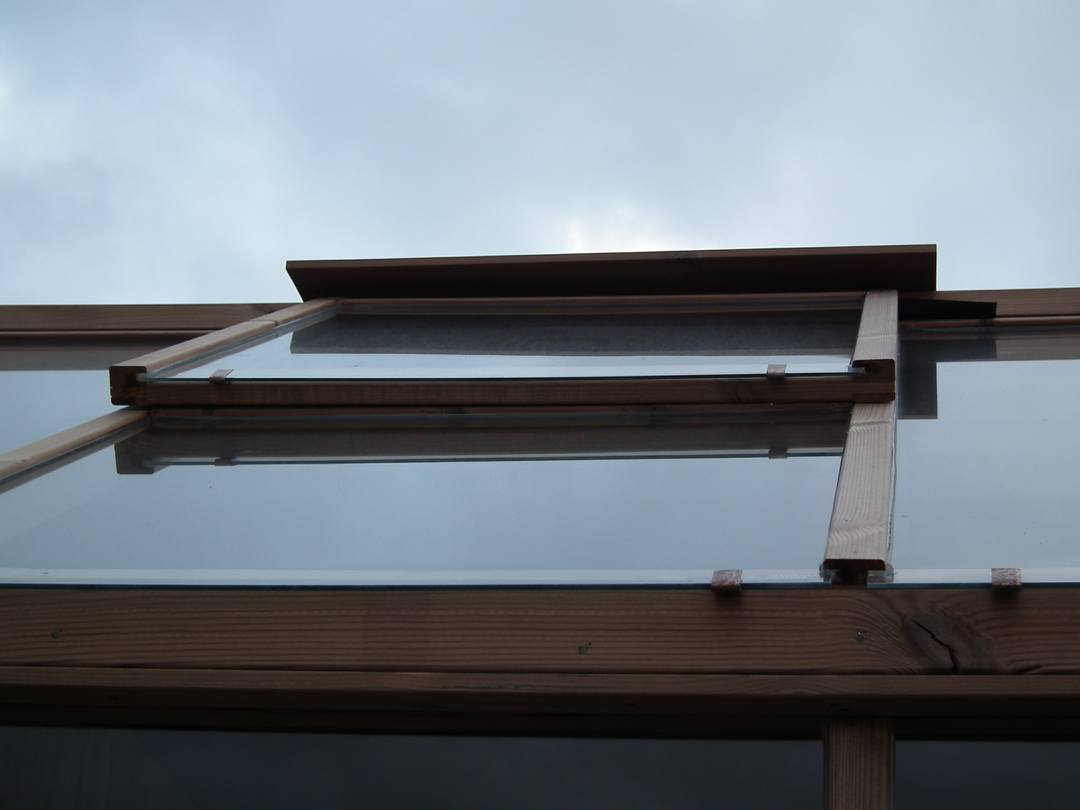 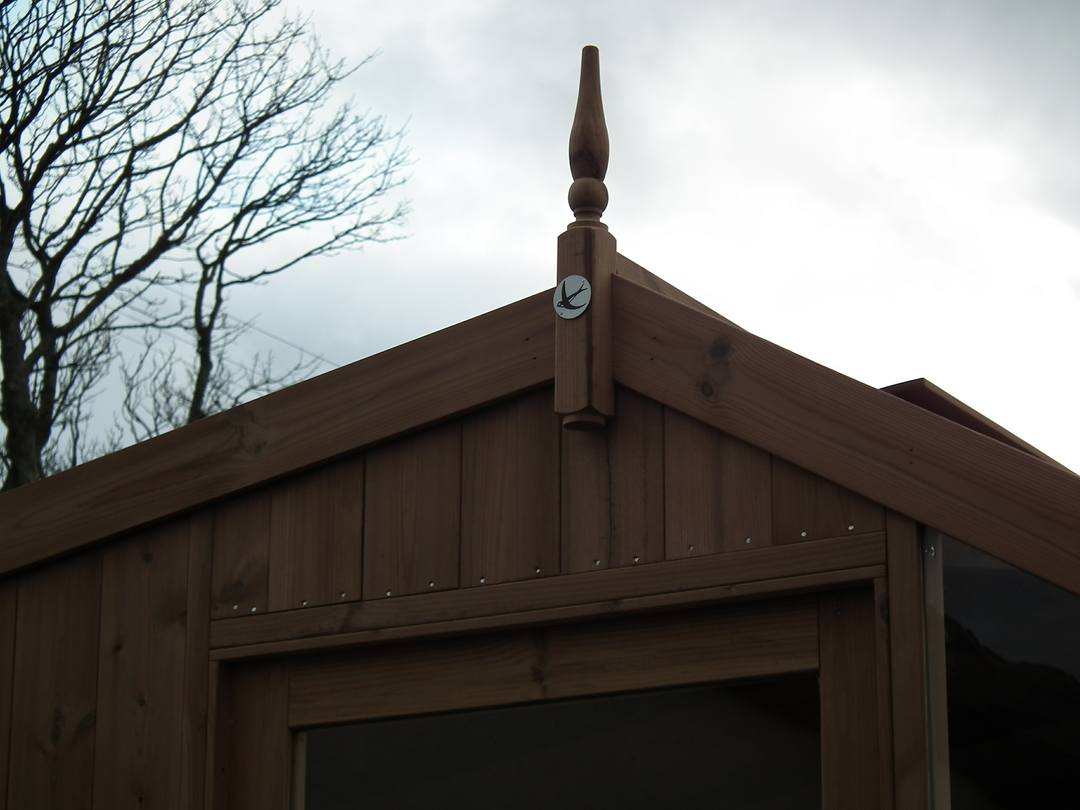 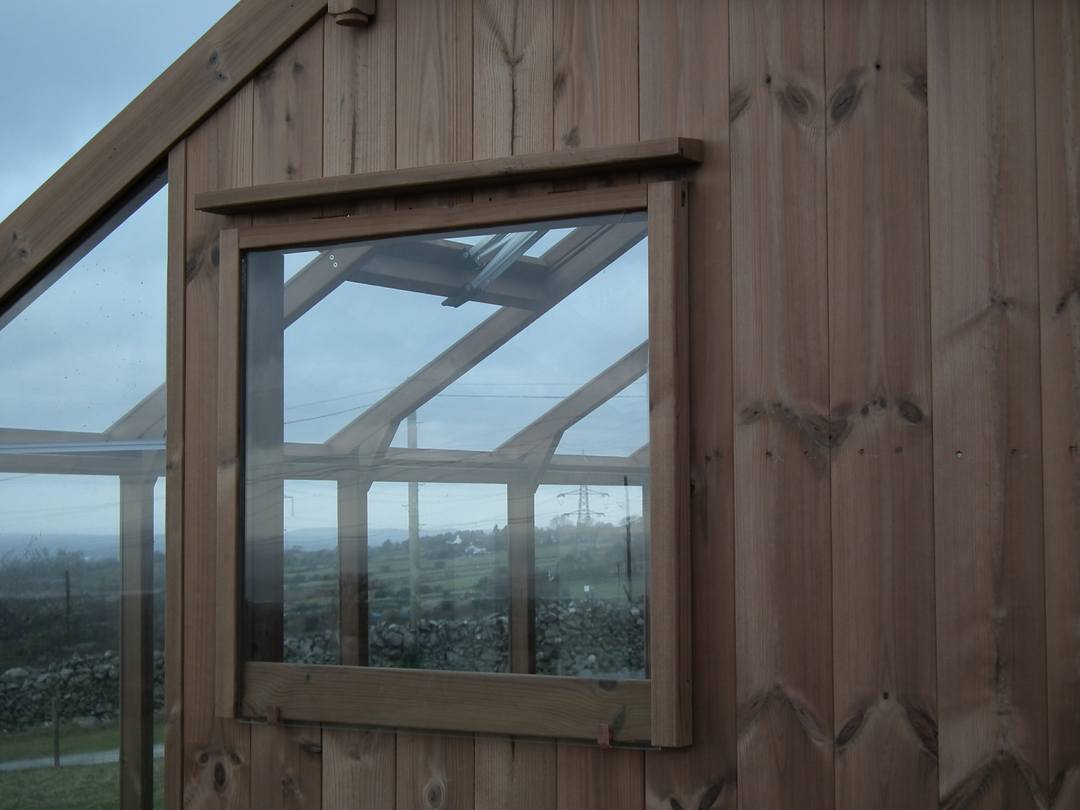 Drip Ledge over Window Prevents Water Getting In 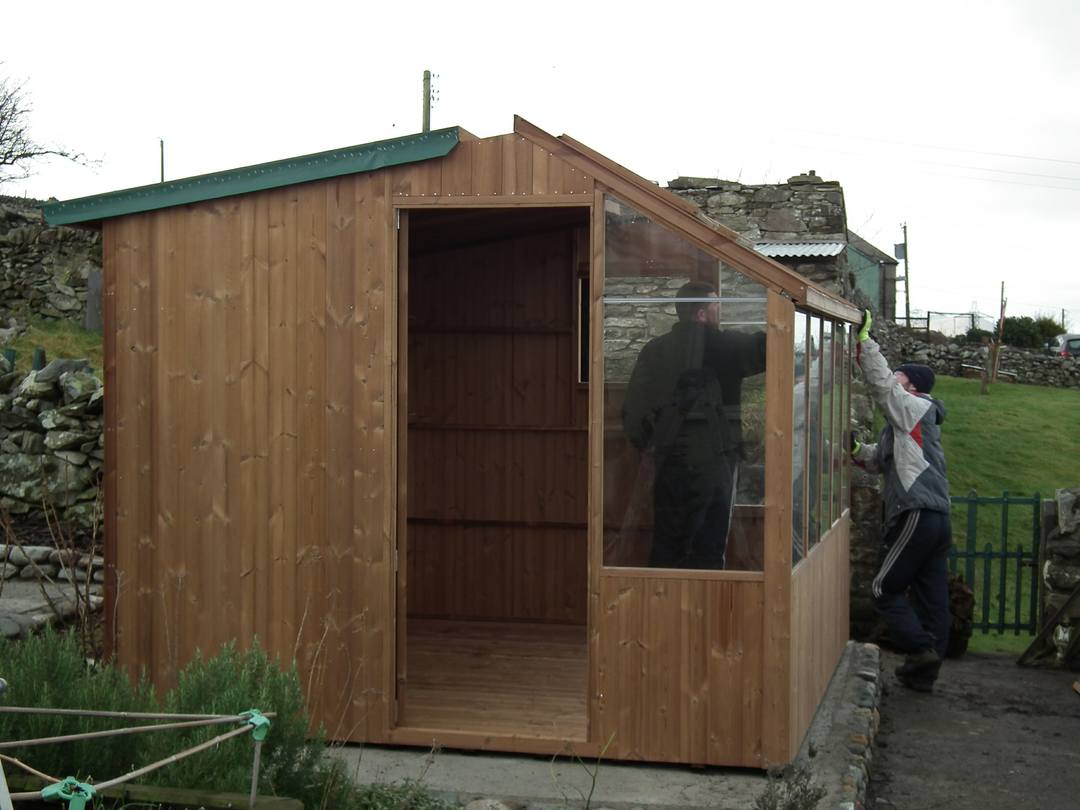 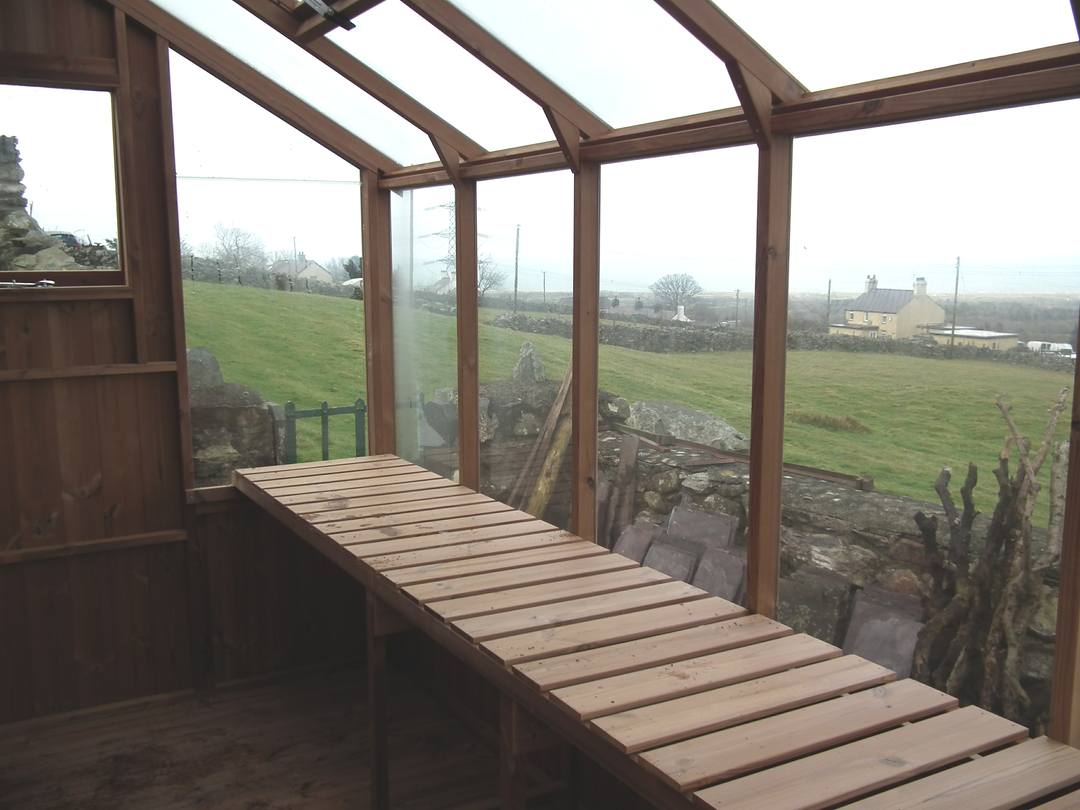 Main Bench in the Shed 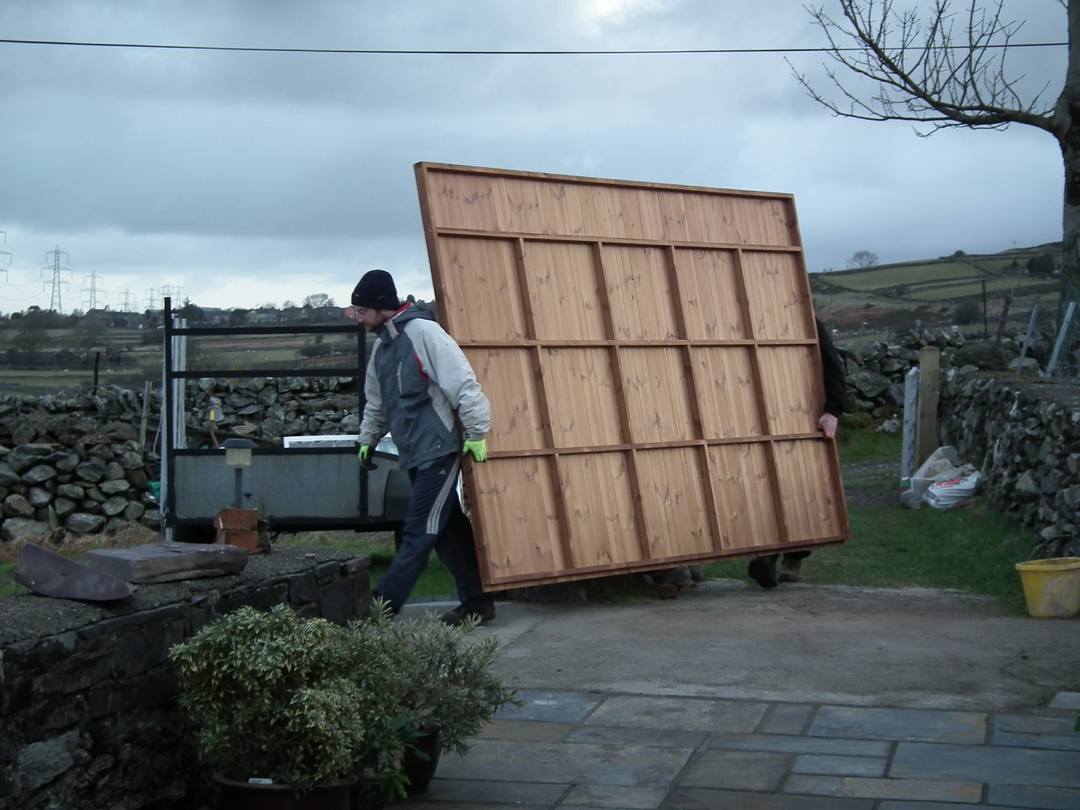 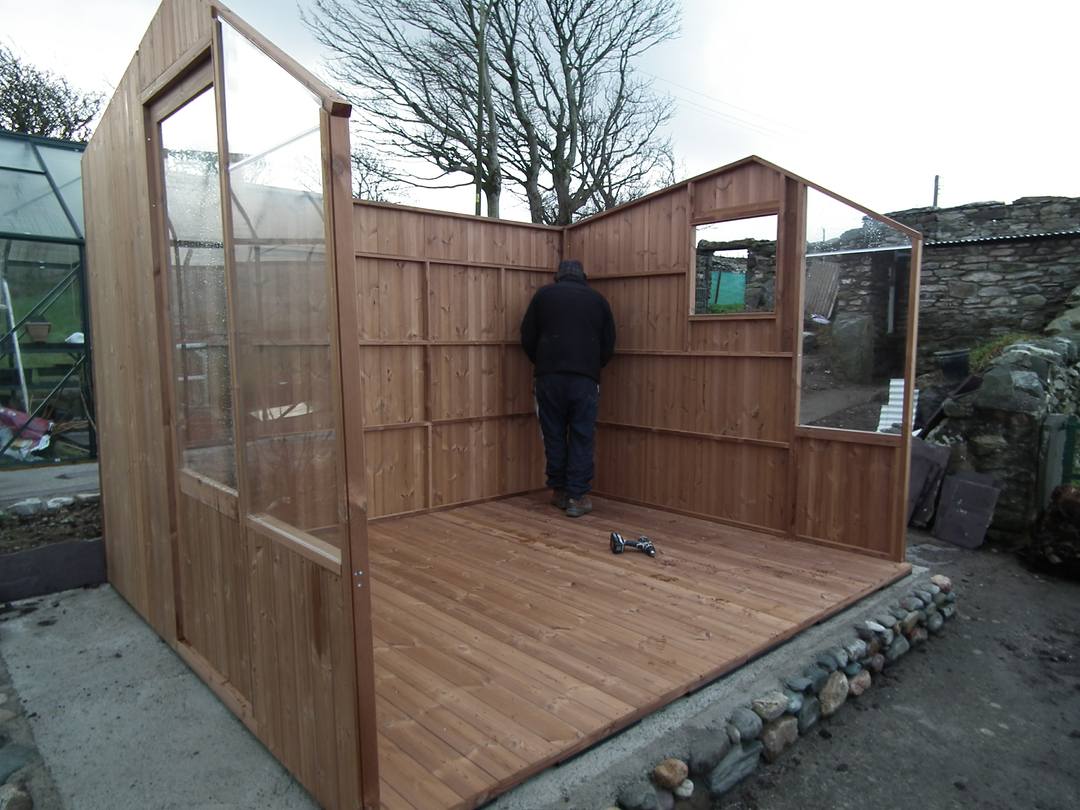 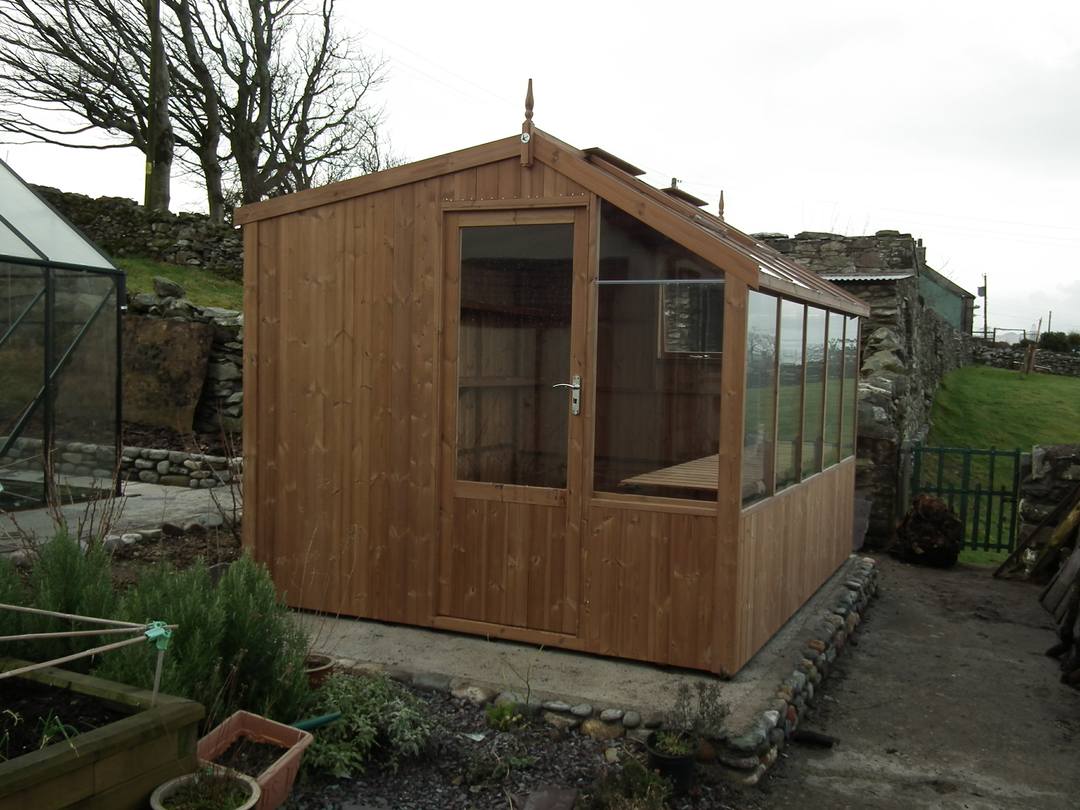