The weather has changed again with the temperatures rising a little and this weekend has been lovely with blue skies and sunshine. It’s still pretty cold at night, especially with clear skies, so the firewood has vanished up the chimney.

In my last post I was talking about the cost of free firewood in time, well I should have mentioned the cost of equipment. I’ve actually got, well had, two electric chainsaws. Why 2 chainsaws is a long story, but one was basically a spare.

Whilst cutting some large rounds into quarters so I could get them onto the hydraulic splitter I strained the chain tension mechanism on one of them. It will take a while for the £15 part to come so out with the back-up saw. I must have been a little impatient because as I was cutting I noticed a burning smell.

Of course I stopped cutting but it was too late. A wisp of smoke turned into a cloud from the motor and it was dead, an ex chainsaw. Motor burned out and beyond repair. So much for free fuel.. grrrr. 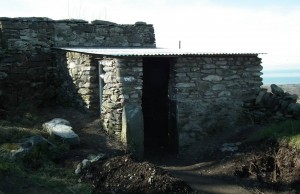 The roof has gone onto the rebuilt pigsty. There’s still some work to do, flashing to stop water getting in, a gutter to take the run off, a door and floor. Once finished we will have turned a redundant, collapsing building into a useful storage shed. If you ever decide to leave the rat race for the good life, do make sure you’ve plenty of outbuildings!

Talking of sheds, I’ve got a date for the new potting shed’s arrival. It’s Friday the 20th at around 8:00 am. The manufacturer builds it for you as part of the price as standard. As sheds and garden buildings go, they’re pretty top-end so it makes sense for them to erect them rather than people put them together incorrectly and blame the shed. Nobody likes admitting they’ve messed up!

When they rang they checked they could access the site, which they can here, and that the base was ready. I checked that it would be OK in our exposed, windy conditions. The chap on the phone said they have sheds in some very exposed spots and was very confident it would stand up with what Snowdonia can throw at it.

Val’s considering writing a recipe book which seems to mean that every meal is followed by an interrogation as to the result. The latest creation went down exceptionally well. A chocolate bread. It’s not overly sweet or even over chocolate – subtle is the word and very light. Apparently it works with peanut butter, which I hate, but it was wonderful with strawberry jam.

Although February is often the worst winter month, spring isn’t far away and a close look at the trees and bushes will reveal buds getting ready to break and the sap starting to rise. This means it’s the last chance to safely transplant trees and bushes before they erupt into growth awakening from their dormant winter.

We’ve at least three self-seeded goat willows in the back border to move and a lot of pot-grown trees and bushes to finally set free in the ground. Just in case I was getting bored!

In 1821 William Cobbett, famous author of Cottage Economy and social reformer, acquired a 4 acre small-holding in the little village of Kensington. Now it’s the underground station.