February has come in with a cold snap. As I went to bed on the first it was starting to snow and in the morning I awoke to a snow-covered land. It only lasted a couple of days but the temperatures have remained hovering around freezing. 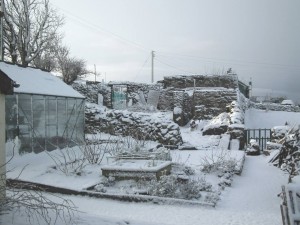 It’s not the actual temperature that’s a problem so much as the wind chill. I picked myself up a bargain wind and waterproof, fleece-lined jacket on Ebay but I might as well have a string vest when the wind blows. I think one of those North Cape jackets the BBC Wales reporters seem to wear might be the answer but I don’t earn what they do at the BBC! 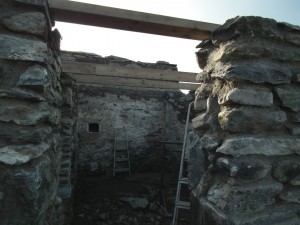 New roof beams going in on the old pig sty.

Bryan the builder has been making me feel a total wimp, he’s out there re-building the walls and putting new beams across for the roof despite the weather. He’s even had to use anti-freeze in the mortar. It’s coming on well though, another couple of good days and it should be finished.

Whilst he gets on outside, in the cowshed I’ve been building a stud wall but after a couple of hours I’ve had enough, even with a fan heater taking the chill off the air and the odd mug of soup to keep me going. Tough lot, the Welsh, tougher than me! 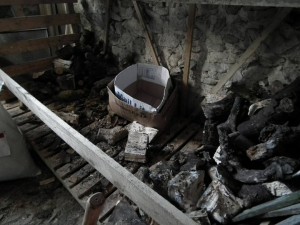 Wood Store – where has it all gone?

Heating in the Country

When we lived in the town we had our electricity and mains gas on a dual-fuel deal. Here we don’t have mains gas, we’ve got an LPG tank under contract to Calor. LPG is, I believe, twice as expensive as mains gas. This provides hot water, cooking and background heat from the central heating.

LPG is still cheaper than electricity by about a third but in this weather it is still costing us £6.00 a day to keep the house warm. We could burn coal on our multi-fuel heater but even that’s not exactly a cheap option nowadays. Buying in logs of seasoned wood to burn is dearer than coal.

But hang on: we’ve a load of wood left from the trees we took down and trimmed a couple of years ago. Nicely seasoned, all it needs is to be cut down to a size that fits the stove. Free fuel! Except this free fuel takes time to process.

It took two days work to fill the woodstore and that’s with a chain saw and hydraulic log splitter. Just carrying in wood enough for a day’s burning takes half an hour and a woodburner or coal fire is very different to a gas boiler. It takes cleaning out, building up and lighting each morning to get it going. Then it needs pretty constant attention and re-stocking throughout the day to keep it going. So even free fuel has it’s price if you count in your time.

On the other hand, there’s something magical about a real fire. We’re still cowering in our cave as the snow falls outside, feeding it bits of wood to keep the chill from our bones. So what that it’s a double-glazed cave with carpets and curtains? I’ll be roaming the hills with a spear hunting mammoths next!

2 comments on “A Freezing Start”

Leave a Comment Here on A Freezing Start Cancel reply