Holiday Gardening in the Limousin

Well we’re back from the beautiful Limousin where we’ve spent the last nine days learning the meaning of the song – “Busy doing nothing” – “We’re busy doing nothing, working all day through, we’re trying to find lots of things not to do. …”

We left Liverpool from John Lennon Airport (I wonder what he’d have made of that) in brilliant sunshine and Ryanair managed to deliver us nearly half an hour early to Limoges. Although I’ve no complaints about the flight, possibly because I fell asleep just after takeoff and awoke during landing! The check-in was crazy, two huge queues slowly crawling to one desk where one clerk was on duty as two clerks sat chatting in the next empty channel. Anyway, arrival in Limoges to a monsoon rainstorm. I’ve stood in showers with less flow.

Picked up our car and slowly drove down the Haute Vienne in the rain to our friend’s house, which we managed to find thanks to Val’s incredible navigating skills. She’d prepared us a little five course meal and a few bottles of wine so that was nice.

The next morning was damp but the sun was shining and after a breakfast on the patio we went for a tour of the garden. She only has a couple of acres, poor thing.

My first port of call was the vegetable area of course. She’s got quite a small area turned over to vegetables, mainly in deep beds but she’s going to have a much larger patch next year in another part of the garden. The main trouble with where it is now is the two 60 foot cherry trees and half a dozen mature apple trees taking away light and food from the vegetables.

Despite barriers, traps and night hunts her major problem was large brown slugs, dozens of the devils. As fast as things were growing, the slugs were munching them up. You can see three of  them on one lettuce!  I asked why she didn’t use pellets and the answer was that she didn’t want to harm the frogs and hedgehogs, not to mention her four cats. 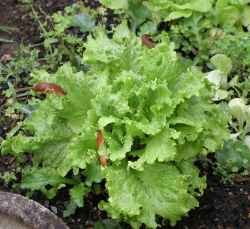 So later that day we searched for the safe slug pellets containing ferric phosphate rather than the more dangerous metaldehyde type. We hit about three garden centres and DIY stores to no avail. I was quite amazed by the large range of chemicals they stocked, you name it they have something to kill it but no safe slug pellets.

On the way back we dropped into a Champion supermarket to pick up some wine and there they were in the gardening section. If you live in France, you’re looking for pellets containing “Ferramol”. They cost about 8 euro rather than 5 for metaldehyde based pellets in an equivalent sized packet.

Our friend has created a large pond in her garden to attract wild life and she now has half a dozen frogs living around it, which should now be safe with these pellets. The pond is surrounded with a rockery and has a cascade where the frogs live. There’s a couple of small islands on which she’s put bamboo canes for the dragonflies to land on. It’s amazing how many huge blue and yellow dragonflies were there along with iridescent turquoise and red damsel flies and water boatmen skating across the surface. 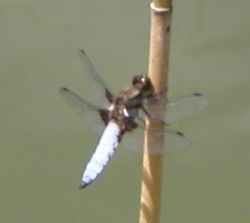 A place like that where you can just sit and enjoy the wildlife to the sound of trickling water does not actually encourage you to much else but I did help out clearing a couple of borders and lopping back a few trees. There is something very satisfying about clearing a mass of brambles.

Generally the weather was between warm and hot with a fair bit of rain. The rain gave me an opportunity to settle down with some gardening books and just enjoy a good read.

We managed a couple of meals out, one thing the French know is how to cook and I really don’t understand why they’re not a land of sumo wrestlers. One memorable seven course meal managed to defeat even my abilities! As we drove back from the restaurant which was in a converted old presbytery there was the most amazing electrical storm I’ve ever seen. Driving through forest that was pitch black one second and flash lighted the next by sheets of lightening across the whole sky.

We did bring back some souvenirs. Now I know most people return from a holiday in France with some wine and cheese but not us.

I found some 200gr boxes of seeds cheap in a supermarket, dated 2010 so I’ll be able to store them. A box of Broad Bean Aquadulce and peas Kelvedon Wonder (Merveille de Kelvedon) went in along with French bean Rocquencourt that we love for the fine waxy yellow beans.

I also got a pack of haricot beans to grow for the actual bean, which we like in soups and stews. “Coco nain blanc precoce”

My friend grows a really nice red spring onion so we’re trying them, “Oignon Rouge de Florence Race Simiane” According to the pack they are sown September to December for harvest in May to July. Some bulbing white spring onions (Hatif de Paris) went in to try next year as well.

Tomatoes Marmande went in to try next year and I picked up 3 packs of carrots. I know I’m a little short on carrot seed for next year so we’ll see how they do. The climate in the Haute Vienne is very similar to ours except a little more extreme so I think I should be OK with everything.

I also bought an 11L watering can for the greenhouse. It’s shaped a bit like a milk churn and should be good for storing water in the greenhouse without taking up too much room. We also got a couple of small indoor cans for watering seedlings.

If security x-rayed our cases they probably decided that the English are completely mad!

We visited some people who collect old garden tools, but I’ll cover that in a separate entry and I’ll be posting more photographs in the photo section later today.

It all went far too quickly and so we left the Limousin wanting more but with rain lightly falling it wasn’t too hard to go. Arrival at Liverpool was fun, the monsoon that greeted us in France was exceeded by the Liverpool monsoon. By the time we got to the car I was literally soaked to the skin, even the contents of the suitcases were wet.

Looking forward to seeing the plot later today, hope it’s not all drowned.