Back on the Allotment

Yesterday was not good, the rain varied from light to heavy and I was pretty tired so it was this afternoon before I got down to the plot. Quite a nice afternoon, really hot when the sun broke through.

I was amazed when I saw the change just ten days have made to the plot. Everything has grown like crazy, especially the weeds.

The beans that had not started to show in pots are now about a foot high and very ready to plant in the coldframe. The sweetcorn is about waist high and the outdoor bush tomatoes are pushing the barn cloches off.

The first early potatoes are ready to harvest, probably the second earlies as well and the main crop are looking really well. The only negative is the Japanese onions and garlic. Most of the garlic looks really unwell and rusty and the Japanese onions aren’t mature but their roots seem to have rotted off. Anyway, they’ll keep us going until the main onion crop comes in. The Ailsa Craig onions look really promising.

The comfrey has recovered from its cut and is already between a foot and two high. If there is one plant that never fails to impress me with its growth, it’s comfrey.

Nearly as amazing as the comfrey was the tomato situation in the greenhouses. All the cordon varieties really want to be a bush, which is why we pinch out those sideshoots. Well in ten days the sideshoots had grown up to 18″ and there were lots of them. So many that at first I wondered if I could sort out the mess. Energy that should be going into fruit was happily being wasted on excess foliage but the first trusses have set and small tomatoes are there to be seen.

It took over an hour to sort out the tomatoes, cutting off the sideshoots and tying them into the stakes but they look a lot better for it. Thinned out a few carrots in there, they’ll make a lovely meal, just washed and steamed.

Next job was to water and feed, the tomatoes having set their first trusses it’s time to start feeding. The carrots have put more top on than I expected so they’ve shaded the peppers and aubergines behind them but I think they’ll be OK.

The lettuce in the greenhouse are mature whereas the ones on the outdoor salad bed are a week or more off. Really goes to show the difference in speed of growth that cover produces. One of them in the greenhouse has already gone over, though.

I took a break to harvest all but a couple of the Japanese onions, they may as well be used if we can as they’re not doing any more in the bed. The plan was to move onto the small greenhouse tomatoes which are nearly in as bad a state as the big greenhouse but it started to thunder. So I quickly watered in the small greenhouse and headed back to the ranch. Actually managed to get in just as the first drops of rain arrived. As I write there’s a torrential downpour and electric storm but from what I can gather we’re doing better than a lot of people who are flooded out.

My New French Watering Can and Tomatoes in Small Greenhouse 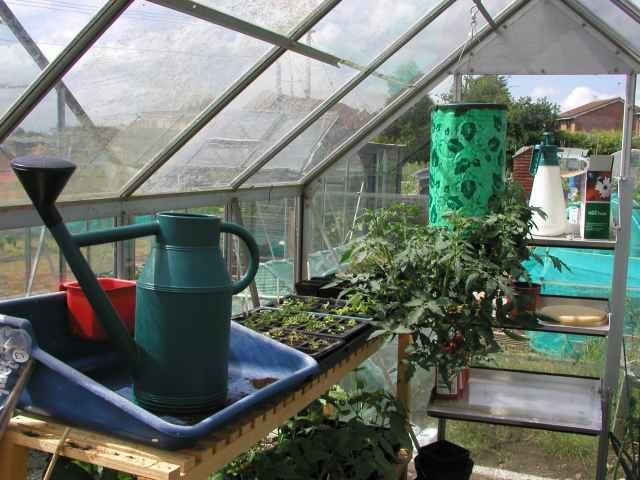 Leave a Comment Here on Back on the Allotment Cancel reply