Planting out gooseberries and cultivating red and blackcurrants.

I’ve been making the most of this spell of good weather by getting outside as much as I can. I really begrudge sitting indoors on a nice warm day when I could be playing outside. Unfortunately, when the good weather arrived on Easter Saturday the most awful head cold hit that had me in bed for two days.

I don’t know if it was the cold making me feel miserable or the sheer frustration of not being up to doing any serious work outside when the weather finally changed to good but I wasn’t a happy chappy as they say. Anyway, moaning won’t get things done so enough of the negative. 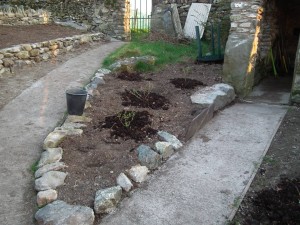 Gooseberries Planted with Compost Spread Around

The gooseberry patch is now planted up. Gooseberries can be a bit painful to grow as they’re thorny plants. The most difficult thing is when couch grass gets established under the bush and tangled. Pulling it out doesn’t do a lot unless you can get the roots out as it just comes back again. So it’s important to clear the patch of couch and any other perennial weeds prior to planting.

The only practical answer I have to couch growing around the roots of established bushes is to spray with glyphosphate when the bush itself is dormant and leafless so it doesn’t absorb the weedkiller. Not organic but it works.

Some say you should space gooseberries at 5 feet apart but I reckon 4 is adequate and if you’re tight for space as little as 3. Mine have gone in at 4 feet apart (120cm).

The planting holes got mix of hoof & horn and bonemeal, about 4 ounces, mixed into the base and some mycorrhizal fungi innoculant. This should get them well established.

Red & Blackcurrants plus a Jostaberry 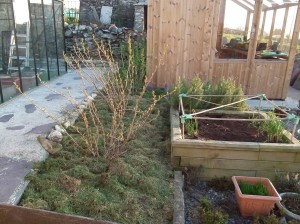 All my currant bushes got some compost around them along with a scattering of slow-release fertiliser to help them through the season and I’ve started mulching with grass clippings.

One thing I love about fruit growing is that, once planted, they’re little work to look after. The grass clipping mulch will suppress weed growth so apart from the odd determined dandelion or nettle there’s no weeding to worry about. A bit of feeding and mulching at the start of the year and pruning in the autumn / winter is all that’s required except for harvesting of course.

Strawberries – the Exception to the Rule

There’s one exception – strawberries. Not too much work until the runners start developing and then it’s quite time consuming snipping those off. Still, you do get free plants from the runners if you want so it’s an ill wind that blows no good.